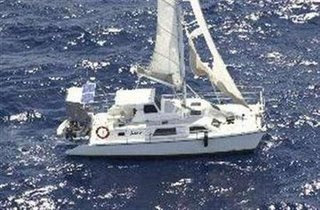 Updater on the crew of Kaz II, mysteriously missing since the middle of April, lingers, set out in Fate of ghost boat crew swallowed by the sea:

Since then, despite searches and forensic investigation, no evidence has been found to establish what befell the three crew. "There is absolutely no evidence to suggest that violence or foul play were involved," said Chief Superintendent Roy Wall, who commanded the sea and air search from Townsville. "Something — we don't know what — went badly amiss."