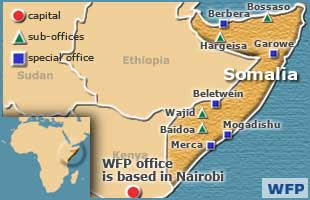 Who will bell the cat?

UN report on the impact of Somali pirates on food distribution programs in Tackling Piracy in Somali Waters:

Frequent pirate attacks in Somalia have been threatening commercial shipping and fishing and impeding the delivery of humanitarian assistance to hundreds of thousands of Somalis. The World Food Programme (WFP) and the International Maritime Organization (IMO) jointly issued an appeal in July 2007 for action to halt piracy off the coast of the country. Both UN agencies have been pushing the UN Security Council to ask the Transitional Federal Government of Somalia to help tackle the problem.

Delivery of supplies by sea has been a logistical and security challenge since the collapse of the last national government in 1991 due to the rise in the frequency of pirate attacks. This has resulted in higher shipping costs and a significant reduction in the number of cargo vessels in the water. WFP Executive Director Josette Sheeran stated that close to 80 per cent of its assistance to Somalia is shipped by sea, "but because of piracy we have seen the availability of ships willing to carry food to the country cut by half". There were 15 attacks on ships in or near Somali waters from January to July 2007-two of these on WFP-contracted vessels, wherein a security guard was killed-compared to 10 such attacks in 2006. WFP hoped to deliver food assistance for 1 million people in Somalia, as already high levels of malnutrition had worsened with predicted crop failures. Ms. Sheeran also stated: "Pirates may have a romantic image on the silver screen these days, but the picture might not be quite so pretty from the point of view of someone stuck in a camp for internally displaced people in Somalia, dependent on food assistance for survival."

Map from the linked site of the WFP locales in Somalia and Kenya.