Libya: How are the rebel logistics? 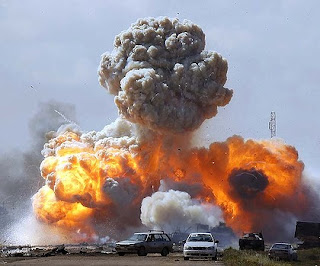 You know the scenario - the government troops fall back and consolidate, the rebels rush helter skelter after them along a long highway. How far can the rebel forces pursue before they run into a logistics problem? Food, shelter, ammo, petrol - where will these things come from to support a rebel "army" in the field.

Who is planning for rebel logistics and force sustainment?


US President Barack Obama earlier said he did not rule out arming the rebels.

France and the US say they are sending envoys to the rebel-held city of Benghazi in the east to liaise with the interim administration there.


The US is likely to be in breach of the UN security council's arms embargo on Libya if it sends weapons to the rebels, experts in international law have warned.

After Hillary Clinton said it would be legal to send arms to support the uprising, lawyers analysing the terms of the UN's 26 February arms embargo said it would require a change in the terms for it not to breach international law.

"The embargo appears to cover everybody in the conflict which means you can't supply arms to rebels," said Philippe Sands QC, professor of international law at University College London.

His view was backed by other experts in international law who said they could not see how the US could legally justify sending arms into Libya under the current resolutions.