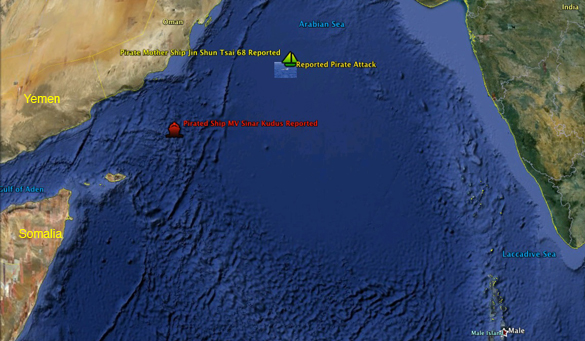 From the NATO Shipping Center, signs of the fog of the piracy war:


There is a continuing high level of piracy activity in the Arabian Sea, with one attack and a number of approaches and suspicious events taking place, most assessed as conducted by dhow-based Pirate Attack Groups (PAGs). Two Fishing Vessels used as mother ships which one of them was involved in the attack of MV LIQUID CRISTAL are also operating in the middle of Arabian Sea. The recently hijacked MV SINAR KUDUS is now moving south towards the Somali coast but can still conduct pirate mother-ship operations in this area.

In the same way the piracy activity is increasing in the Somali basin over the past weeks. MV AL NOUF has recently been attacked in the central Somali basin and whaler PAGs were reported underway off the Somali coast to most likely operate in the southern Somali Basin off Mombasa and towards the Mozambique Channel. It is assessed that the attacks conducted from whaler-based PAGs will continue in the central and southern SB when weather will become conducive.

Photo of MV Liquid Crystal from Shipspotting.com by Luis Felipe G Vaz and used in accord with the terms of that site.
Posted by Mark Tempest at 3/22/2011 07:56:00 AM

Mark Tempest
The main focus of this blog is maritime security. Other matters may appear. I am a retired attorney and a retired Navy Reserve Captain (Surface Warfare). Opinions expressed herein are my own. Sometimes I have the experience to back them up. Your opinions may vary. Don't panic. Feel free to disagree, that's what free speech is all about. Nothing contained herein should be confused as me giving legal advice to anyone. If you are confused, welcome to the club. All mistakes herein are my fault. I have sufficient academic credentials to be dangerous to myself and to others. Comment moderation is at my discretion, so your comments may never appear. You can start your own blog for free and comment there all you want. I enjoy a healthy debate, but not arguing with trolls. If you can't comment without using intemperate language, go someplace else., Under the header: OS2 John Dengel, in USS Ross (DDG 71), prepares to throw a heaving line to line handlers on the pier during a scheduled port stop in Gdynia, Poland (U.S. Navy photo by MCSN Christine Montgomery)