From the fine folks at the NATO Shipping Centre (or Center) - Daily Somali Piracy Overview:


There’s continuing high piracy activity in the Arabian Sea, with two attacks and several approaches/ suspicious activities reported this week, It is assessed that these are probably conducted by dhow based and FV PAGs. Two fishing vessels used as mother ships (FS JIH CHUN TSAI 68 and FS MONTESA/MORTEZA) are also active in this area. The piracy activity is also increasing in Somali Basin. During the past weeks, several whaler based PAGs where reported missing along the shore indicating a possible upcoming increase of pirate activity in the southern Somali Basin as well as off the coast of Kenya, Tanzania and towards the Mozambique Cannel. The weather forecast further supports increased activity as the monsoon transition period seems to finally have settled. In the Gulf of Aden weather condition for the next 24 hours are also favourable for small boat activities and pirates attacks in this area are likely. 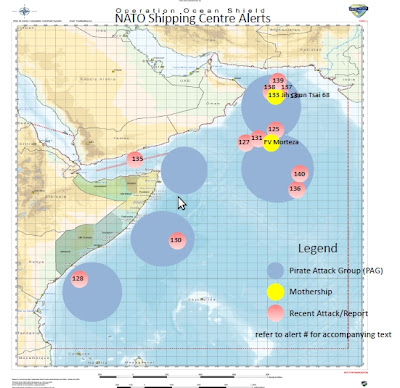