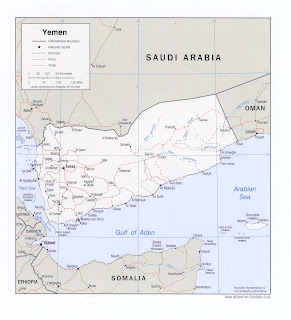 Platts reports: Yemen on the brink as military and political leaders join revolt :


The fate of the once-divided state of Yemen was at a crossroads Monday as senior military and political leaders resigned from their positions and joined a growing anti-government protest to demand the ouster of veteran president Ali Abdullah Saleh.

"Saleh has an opportunity to make a historic decision now," said one of the opposition's youth leaders on al-Jazeera television, which aired footage of what appeared to be the largest demonstration in weeks of unrest in Yemen, an oil and gas exporter and the poorest country on the Arabian Peninsula.

Tanks were deployed outside the presidential palace in the capital Sana'a, where an increasingly isolated Saleh has faced a swell of popular anger over his heavy-handed handling of protests that threaten to unravel the cohesion of a tribal nation that was once split along north-south lines.
***
The US, which considers Saleh a key ally in the fight against al-Qaida militants operating out of Yemen, was compelled to condemn the violence in a strongly worded statement.

President Barack Obama's top counter-terrorism official on Friday condemned "in the strongest terms" the brutal crackdown on protesters saying it would feed extremism.

More from Jane Novak at Armies of Liberation:


Lets see if Saleh has the brains to leave quietly without another blood bath.

Email ThisBlogThis!Share to TwitterShare to FacebookShare to Pinterest
Labels: Yemen