Israel's Blockade of Gaza and the Battle of Media Coverage 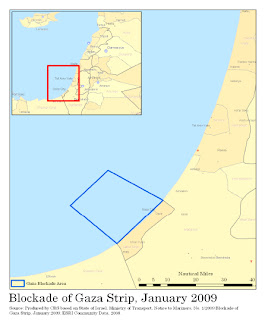 So, in another effort to gain media coverage both sympathetic to the population of Gaza and, of course, for themselves, members of Code Pink are apparently setting out on a mission with the intent to demand protection from the U.S. government (meaning the U.S. Navy) as they attempt to force the well-known Israeli sea blockade of Gaza.

Let's start with this - Code Pink stages pro-Gaza rally at State Dept. (highlighting and blue comments are mine):


The American ship Audacity of Hope, part of the Freedom Flotilla II, will depart from Greece with 50 passengers in late June headed for Gaza. In total, the flotilla will include roughly ten boats carrying 1,000 passengers, and will set sail on June 25. They are billing their voyage as a sequel to the Freedom Flotilla, which was intercepted by Israeli authorities on its way to Gaza last May in an incident that resulted in nine deaths.

Code Pink staged a small press conference on Thursday morning outside the State Department's C Street entrance that featured speeches by Code Pink co-founder Medea Benjamin, who will be a passenger on the flotilla, former CIA analyst and passenger Ray McGovern , activist and flotilla passenger Missy Lane, Palestinian-American lawyer Noura Erekat, and Gazan activist Amer Shurrab.[Got to get those names spelled correctly - it's all about them]

This year's flotilla occurs in a drastically altered atmosphere as compared to last year's. The Israelis have eased restrictions on some goods and Egypt has opened up the Rafah Crossing. Regardless, the activists at the State Department stressed that the people of Gaza still live under harsh conditions and need international advocacy.[This trip is totally unnecessary but we still want the publicity]

Benjamin, naturally dressed all in pink, said she is hoping that the American presence aboard the flotilla will lessen the risk of a violent encounter with the Israel Defense Forces, and called on the State Department to express its support. [Oh Bulls***, Ms. Benjamin is really hoping for a media rich "confrontation" with the IDF - otherwise, why bother?]

"We, as Americans, who are going on the boat that is a U.S. flag ship, that is carrying U.S. passengers...this is the time for our State Department to come forward and say ‘we recognize our responsibility to U.S. citizens and we will put pressure on the Israeli government to make sure that no harm comes to our citizens,'" she said.[Last time I looked, the U.S. government has virtually no responsibility to do anything for citizens who are stupid enough to put themselves in harm's way intentionally or bail them out once they are deep into it. I'd be more impressed if the "flotilla" was sailing into Somali pirate waters to protest the treatment of women in Somalia. More impressed, but not any more inclined to suggest that the U.S. government do a damn thing about it.]

Just a reminder, it's my view that Israel has a perfectly legal right to blockade Gaza under the conditions that exist between the Gazans and Israel.

In support of my view, I offer some information on blockades from part of an earlier post:


There is that the magic word "blockade."

As you may recall, Israel has interdicted ships attempting to carry supplies into Gaza. As noted in an earlier post, this seems to be a legal blockade of Gaza. There is an interesting piece by a Israeli legal scholar Ruth Lapidoth, The Legal Basis of Israel's Naval Blockade of Gaza, which lays out the argument that the blockade of Gaza is perfectly legal under international law.The piece cites the San Remo Manual as setting out the appropriate rules for parties to an armed conflict:


SECTION II : METHODS OF WARFARE
Blockade
93. A blockade shall be declared and notified to all belligerents and neutral States. 94. The declaration shall specify the commencement, duration, location, and extent of the blockade and the period within which vessels of neutral States may leave the blockaded coastline. 95. A blockade must be effective. The question whether a blockade is effective is a question of fact. 96. The force maintaining the blockade may be stationed at a distance determined by military requirements.97. A blockade may be enforced and maintained by a combination of legitimate methods and means of warfare provided this combination does not result in acts inconsistent with the rules set out in this document. 98. Merchant vessels believed on reasonable grounds to be breaching a blockade may be captured. Merchant vessels which, after prior warning, clearly resist capture may be attacked. 99. A blockade must not bar access to the ports and coasts of neutral States. 100. A blockade must be applied impartially to the vessels of all States. 101. The cessation, temporary lifting, re-establishment, extension or other alteration of a blockade must be declared and notified as in paragraphs 93 and 94. 102. The declaration or establishment of a blockade is prohibited if: (a) it has the sole purpose of starving the civilian population or denying it other objects essential for its survival; or(b) the damage to the civilian population is, or may be expected to be, excessive in relation to the concrete and direct military advantage anticipated from the blockade. 103. If the civilian population of the blockaded territory is inadequately provided with food and other objects essential for its survival, the blockading party must provide for free passage of such foodstuffs and other essential supplies, subject to: (a) the right to prescribe the technical arrangements, including search, under which such passage is permitted; and(b) the condition that the distribution of such supplies shall be made under the local supervision of a Protecting Power or a humanitarian organization which offers guarantees of impartiality, such as the International Committee of the Red Cross. 104. The blockading belligerent shall allow the passage of medical supplies for the civilian population or for the wounded and sick members of armed forces, subject to the right to prescribe technical arrangements, including search, under which such passage is permitted.

Professor Lapidoth finds that these rules applied to a blockade of Gaza.