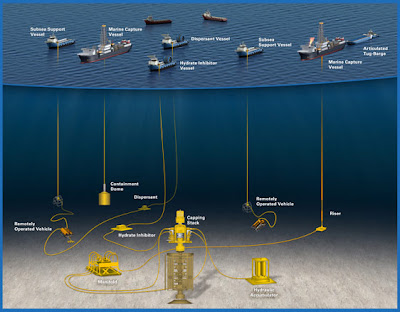 Industry responds to the Macondo/Gulf of Mexico well blowout with new tools to cap such a blown out well, as reported at After Macondo: Emergency Well Capping:


In the wake of the spill, the industry and the wider world has switched on to the possibility of a similar disaster occurring again. Particularly given the increasing depths at which deepwater platforms are now operating, the logistics behind capping a leaking well are mind-boggling.

As a result, a number of emergency well capping devices are concurrently in development or under construction now. Some are intended and tailored for use in particular offshore regions, while others are being offered to oil companies as a kind of global insurance policy against any future disasters.

See the home page of the Marine Well Containment Company (source of the illustration above). It is reported the system MWCC has works down to 10,000 feet. There's a video at that site that shows how the system is supposed to work.

MWCC's start up was funded by ExxonMobil, Chevron, Shell and ConocoPhillips. Membership today has expanded:

As full disclosure, I am a former Chevron employee, looking forward to small retirement check from them in the future.
Posted by Mark Tempest at 6/30/2011 09:35:00 AM