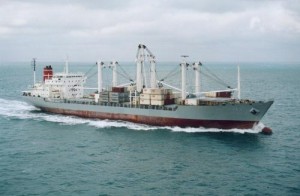 Released by pirates, out of fuel and now, the Egyptian merchant ship MV Suez is sinking:

He said that there was no further news from the owners of the shi, Red Sea Navigation Co, who seemed to have abandoned the 17,300 DWT vessel.

He informed that efforts to send a tug boat, Hasik, from Salalah did not work out after MV Suez, released by Somali pirates after ten-month in captivity, ran out of fuel on its way to the Omani port in the south.

All 22 crew abandoned MV Suez on Sunday evening and boarded the Pakistani naval frigate PNS Babur from where they were due to be picked by F-22P class frigate PNS Zulfiquar.

The escort duties fell to the Pakistani Navy after some sort of disagreement with an Indian naval vessel. See here:


The diplomatic squabble over the “brush-off” between an Indian and a Pakistani warship in the Indian Ocean this week — with both countries lodging protests against each other — appears to have been triggered by the actions of an unsure Indian government that possibly reacted to shrill news TV reports.

The unseemly row has the potential of becoming an irritant in the upcoming foreign secretary level talks.

India pulled the INS Godavari, which was in the region on a routine international anti-piracy mission, off its regular duty to the aid of the MV Suez, which had six Indian crew on board, leading to a mid-ocean scrap with the Pakistani PNS Babur, with the two warships brushing past each other.

Pictures and videos of the encounter — which have been shared with Pakistan — show that Babur was deliberately tailing the Godavari so close that it brushed past the Indian warship’s aft. As the Pakistani warship — which was described by government sources as a “history-sheeter” with two earlier incidents of risky behaviour at sea — tangled with the INS Godavari, its crew shouted anti-India slogans.

Pakistan assert the Indian naval vessel was at fault and have filed their own protest.