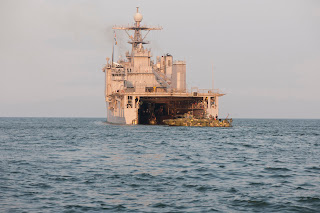 
The prospect of meeting a sleek, armored riverine command boat and its fearsome array of .50-caliber machine guns at sea would undoubtedly induce second thoughts among pirates who prey on shipping in the Gulf of Aden.

That much is certain. But the boats have to get there first. 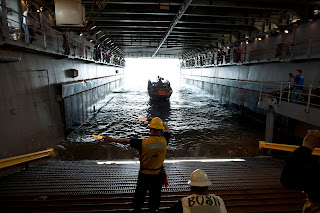 Tuesday, the Navy tested the ability to dock and secure the RCB and the smaller riverine patrol boat in the well deck of the anchored dock landing ship Oak Hill during a proof-of-concept test held at the mouth of the Chesapeake Bay.

Riverine force leaders gave the demonstration a thumbs-up. If senior Navy leaders agree, the riverine force could find itself with a new post-Iraq war mission set outside the green-water arena for which it is designed, and the Navy with yet another capability for the flexible and heavily deployed amphibious force. 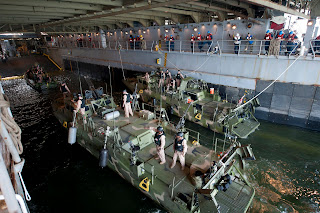 With a few wrinkles removed, sounds like a good idea to try in the real world.

One of those wrinkles is that a lot more boats are needed to do the anti-piracy mission right.

And a really good strategy would be good, too.

Email ThisBlogThis!Share to TwitterShare to FacebookShare to Pinterest
Labels: Counterpiracy, Riverines, US Navy