Eight F-15 fighters were dispatched, according to this:


Japan scrambled eight fighter jets on Thursday after a Chinese state-owned plane breached its airspace for the first time, over islands at the center of a dispute between Tokyo and Beijing.

It was the first incursion by a Chinese state aircraft into Japanese airspace anywhere since the country’s military began monitoring in 1958, the defense ministry said.

The move marks a ramping-up of what observers suggest is a Chinese campaign to create a “new normal”—where its forces come and go as they please around islands which Beijing calls the Diaoyus, but Tokyo controls as the Senkakus.


China asserts the islands over which one of its planes flew is "Chinese" airspace, playing the "It's really our territory card":


"The Diaoyu and its affiliated islands are China’s inherent territory since ancient times . . ."

The Chinese have posted pictures of their adventure above the islands here: 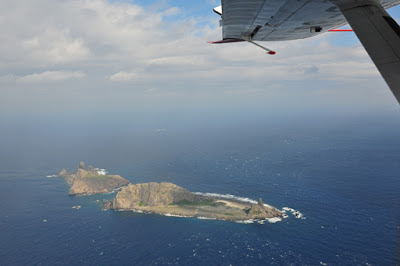 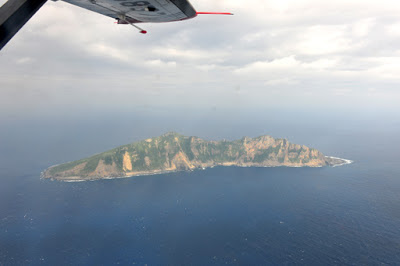 The Google translation of that page is:

Beijing time 10 am, the China Marine Surveillance B-3837 aircraft arrived I Diaoyu Islands airspace rendezvous with China ocean surveillance, 50,46,66,137 boat fleet within the territorial waters of the Diaoyu Islands cruise, cruise on the Diaoyu Islands to carry out sea and air stereo. During the China Marine Surveillance formation on the Japanese side activist propaganda solemn statement of the government's position, urged the Japanese side vessel immediately leave China's territorial waters.

Kinda takes the "accuses" part of the ABC headline out of the discussion, since the Chinese have admitted being in and above the islands - the dispute moves to one of those wonderful international law things about whose turf those islands are.
My guess is the "stereo" part refers to the effort being joint between the air and sea units. As reported here, the Chinese already had ships in the territorial waters around the islands:


According to the coast guard's 11th regional headquarters in Naha, Okinawa Prefecture, the three ships moved into Japanese waters west of Uotsuri, one of the Senkakus, at around 3:20 p.m. Japan Coast Guard ships warned the three vessels to leave. But crew members on the Chinese ships responded by saying the area 12 nautical miles from Diaoyu constitutes Chinese territorial waters.

Meanwhile, a Chinese fishery patrol ship entered the contiguous zone surrounding the Japanese territorial waters at a point northwest of Kubajima, another of the Senkakus, on Wednesday morning.