Sunday Reading Fun for the New Year: "Mind Your Own Business"

When a Congressman from one party compares members of the other party who are in vigorous disagreement with the direction the national government is taking to "hostage takers" it is time to take a look at where this sort of politics takes us (and, yes, Mr. Hoyer is not the first politician to use such language - members of both major parties are guilty of demonizing their political opponents).

A piece on what the politicization of everything means to us at Human Events "The bitter wastes of politicized America":


The rest of us should consider the contemptible behavior of people like Hoyer as we watch the expansion of politics into every area of our lives. The government grows; the private sector diminishes; everything becomes a political act. Soon you will see the phrase “none of your business” become an antique aphorism, as quaint as telling someone to “dial” a telephone number. Everything is everyone’s business now. That’s what Big Government means.

I'm no anarchist, but John Hayward has put his pen exactly on the problem with "nanny-statism" and the old theory, espoused back in my college days that "everything is political" and "the personal is political" (linked to C. Wright Mills and The Sociological Imgaination).

It is time to revisit the social contract. As Clint Eastwood said at the GOP convention:


We -- we own it. It is not you owning it, and not politicians owning it. Politicians are employees of ours.

In a society founded on protecting dissenting views, it is remarkably autocratic to suggest that only your view is the proper view and that is the "duty" of citizens to get in line.

Once again I invoke an old piece I read years ago, 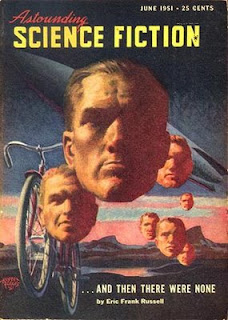 Eric Frank Russell's planet of Gand, which introduced me "MYOB" - and you can read about it here:


‘A man has duties. He has no right to refuse those.’

‘No?’ She raised tantalizing eyebrows, delicately curved. ‘Who defines those duties—himself or somebody else?’

‘His superiors most times.’

‘Superiors,’ she scoffed with devastating scorn. ‘No man is superior to another. No man has the slightest right to define another man’s duties. If anyone on Terra exercises such impudent power it is only because idiots permit him to do so. They fear freedom. They prefer to be told. They like to be ordered around. They love their chains and kiss their manacles. What men!’


Do not allow our political class, nor other slavish followers of any would-be autocrat to decide for you where your duties lie. In this time, facing these enemies of republican government, reasoned dissent honors freedom of speech and thought.