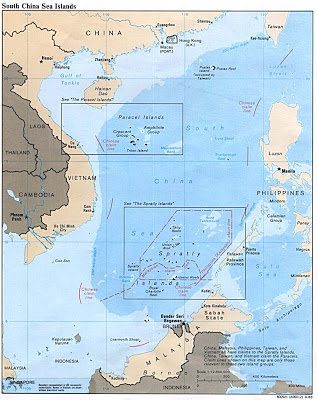 With tip of the hat to Walter Russell Mead Chinese Sabotage in the South China Sea, it's off to the Chinese "Bad Neighbor Policy" or, perhaps, the "Chinese Big Ugly Stick Policy."

See Vietnam accuses China of maritime sabotage and this Reuters piece, . From the latter:


Vietnam's condemnation came a day after its state oil and gas company, Petrovietnam, accused Chinese boats of sabotaging an exploration operation by cutting a seismic cable being towed behind a Vietnamese boat.

Vietnam's Foreign Ministry spokesman condemned the cable cutting as well as some recent Chinese provincial regulations that identified the disputed Spratly and Paracel islands as Chinese, and a map that did the same thing.

"The actions of the Chinese side have seriously violated Vietnam's sovereignty over the two archipelagos," the spokesman, Luong Thanh Nghi, said in a statement.
***
India has also declared itself ready to deploy naval vessels to the South China Sea to protect its oil-exploration interests there, a new source of tension in a disputed area where fears of conflict have been growing steadily.

Indian navy chief, Admiral D.K Joshi, said on Monday that, while India was not a territorial claimant in the South China Sea, it was prepared to act, if necessary, to protect its maritime and economic interests in the region.

"When the requirement is there, for example, in situations where our country's interests are involved, for example ONGC ... we will be required to go there and we are prepared for that," Joshi told a news conference.

CDR Salamander has a post on the potential Indian deployment here.