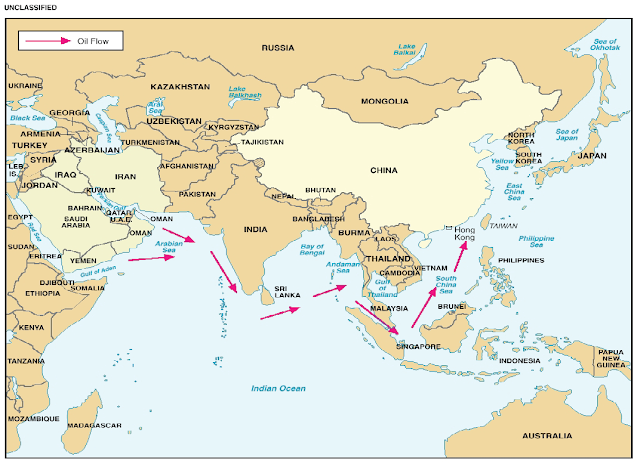 Interesting piece at the Foreign Policy website, "India's Ocean" by Dhruva Jaishankar, posing one of those fundamental questions, "What is the role of the Indian Navy as China asserts dominance to India's east?":


For its part, China needs to appreciate that its aggressive pursuit of maritime territory compels India to cooperate more closely with Vietnam and the Philippines. Beijing's issuing of passports this November featuring a map showing the fullest extent of its territorial claims was a remarkably clumsy gesture, provoking simultaneous outrage in India, Vietnam, the Philippines, and Taiwan. China may have only itself to blame if these states find greater common cause with one another, and with other regional maritime powers.

The map above indicates key Chinese sea lines of communication. You might take note of India's position relative to them.

You also might take a look at the Thomas X. Hammes piece, Offshore Control: A Proposed Strategy for an Unlikely Conflict (pdf), which suggests a "distant blockade" (or "Offshore Control") of China as a possible strategy:


The strategy of Offshore Control works with willing Asia-Pacific nations to ensure that the United States can interdict China’s energy and raw material imports and industrial exports, while protecting our partners.


Offshore control would deny China the use of the sea inside the first island chain, at the same time defend those islands, and dominate the air and sea outside that theater. It envisions a stand-off military campaign focusing on a war of economic strangulation rather than on penetrating Chinese airspace to physically destroy its infrastructure. It seeks to force China to fight in ways that maximize U.S. strengths while minimizing China’s. In essence, OC provides a strategic context for an operational approach that goes beyond Air-Sea Battle to use the U.S. geographical advantage to maximize the effectiveness of a campaign using our air, sea, and land assets.

Oh, and if you were wondering about the value of a strong U.S. Navy - this discussion is right on point. Being able to project power even when it needs to be done without local help - that's a big chunk of the Navy's job description.

Keep in mind that it is the job of the military strategist to work through "unlikely" scenarios just in case. Next time some idiot media hack reports on secret U.S. plans to re-take Midway Island based upon some outlandish event occurrence, it shouldn't really be a shock to you.

UPDATE: There has been some notice of the fact I used an "oil flow" map to illustrate this post. Here is a more recent map that shows vital sea lanes (click on it to enlarge), followed up by a closer view in the China region: