Sea Shepherds Get Tagged as "Pirates" - Remain Idiots at Sea 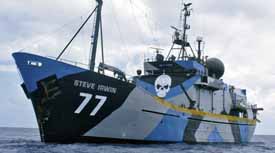 Which, in the great scheme of things, shouldn't be too surprising to the SSI, as it is a label they have long applied to themselves, see here, albeit as "pirates of compassion."

Did the 9th Circuit get it right? I think so. You can read about other views at Lawfare's Ninth Circuit Calls Sea Shepherd Actions “Piracy” and the links therein. 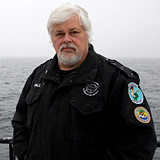 Oh, and "Captain" Watson - well, he is already on the run with two Interpol "Red Notices" against him (see Sea Shepherd leader arrested - attempted murder), as the SSI crowd seeks funding to find him a "safe haven":


There are two active Interpol Red Notices issued against Captain Watson at the request of Costa Rica and Japan. Underlying these notices are non-lethal acts in defense of marine life suffering from illegal shark fishing and whaling operations. The warrants are politically motivated.

You know, "attempted murder" is almost always "non-lethal" - otherwise the charge would be "murder."

Frankly, I have been surprised that the pursuit of this organization has not included charges of terrorism. Of course, that probably wouldn't go over well with some of the famous people who fund this piracy - since it could result in the seizure of their assets as supporters of terrorism (see here). Former Secretary of State Clinton suggested nabbing the assets of Somali pirates under some theory of law - one that could be applied to the assets of Sea Shepherds International, I suppose.

I wonder if SSI could be considered a "criminal enterprise?"

Even better is the possibility of civil law suits against SSI and its funders . . .

Paul Watson, Chief Idiot of the SSI, is unimpressed with the 9th Circuit ruling, as set out in 'Pirate' ruling irrelevant: Sea Shepherd:


SEA Shepherd founder Paul Watson has described a US judge's opinion that he is a "pirate" as one-sided and irrelevant.

Never heard the winner of a legal case complain like that.

The SSI press release on the ruling can be found here:


Clearly, this is a bad decision by the Ninth Circuit Court, but not unexpected,” said Scott West, Director of Intelligence and Investigations for Sea Shepherd U.S. “But it’s an opinion; everyone has one. We happen to agree with Judge Jones' very well articulated and reasoned opinion on the matter,” he stated.

“Beyond that, the vitriolic and grandstanding manner in which the Ninth Circuit rendered its opinion makes us seriously doubt their qualifications for making a just decision. This court is part of the problem, not the solution. Not only is there no room for such a biased and unprofessional legal opinion, they somehow have the audacity to throw a highly respected, honored judge — one of their own — under the bus in order to side with foreign interests. Is this a decision of an American court or have we somehow mistakenly landed in Japan?” West added.

Among other things, it brings up the "court of public opinion" always the last gasp of a loser. By the way, Scott West is an idiot - an appellate court opinion is not just like the opinion of the guy sitting on a bar stool next to you.

Email ThisBlogThis!Share to TwitterShare to FacebookShare to Pinterest
Labels: Idiots at Sea, Law of Piracy, Piracy