Lots of scary tales around the Navy but one classic is the alleged time-traveling USS Eldridge and the "Philadelphia Experiment". The story goes:


According to certain accounts, the actual results of the experiment involve occurrences far stranger than anyone could possibly imagine. The tests being conducted were an attempt to render a ship invisible to enemy radar. This was to be accomplished by wrapping an electromagnetic 'bottle' around the ship in question, absorbing or deflecting radar waves. The bottle was created by two (or four - accounts differ) massive Tesla coils which acted as electromagnetic generators; one was mounted forward and one was mounted aft. Other accounts state that a series of magnetic generators, called degaussers, were used. When activated, the electromagnetic field would extend out from the ship and divert radar waves around the ship, making the Eldridge invisible to radar receivers.

When the actual test was put into motion, a number of unexpected and bizarre side effects occurred. As the electromagnetic field increased in strength, it began to extend as far as 100 yards out from the ship in all directions, forming a large sphere. Within this field, the ship became fuzzy and indistinct, and a greenish haze formed around the vessel, obscuring it from view. Eventually, the only visible object was the outline of the hull of the Eldridge where it entered the water. Then, to the amazement of onlookers, the entire ship vanished from view.

To the Navy, the test had succeeded beyond their wildest dreams. Not only had they rendered a ship invisible to radar, they had made it optically invisible as well, not to mention causing the vessel to teleport hundreds of miles in a matter of minutes. For the crew, however, the trip had been a nightmare.

The test had managed to render the entire ship 'out of phase' with the surrounding universe, 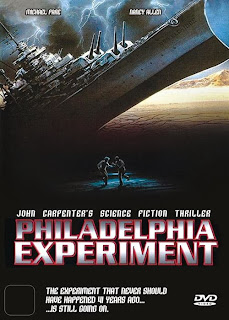 which is why it was able to travel from Philadelphia to Norfolk instantly. This phasing effect had drastic effects on the crew members. During the experiment, crew members found they could walk through solid objects, and when the field was shut off, men were found embedded in the bulkheads, decks and railings of the ship. The results were gruesome enough that some men went mad. Afterwards, several crew members simply vanished. A few disappeared into thin air; one, eating dinner with his family, rose, walked through a wall and was never seen again. Some men entered into what was called the 'Freeze'. This is where a man faded from view; unable to move, speak or otherwise affect his surroundings. Initially, the Freeze effect lasted only a few minutes to a few hours. Interestingly enough, invisible crewmen were still visible to other sailors who had survived the original experiment. After a while, the Freeze effect lasted for days or months, and became known as the 'Deep Freeze' (other terms include 'Caught in the Flow', 'Caught in the Push', 'Get Stuck', 'Go Blank', 'Hell Incorporated' or 'Stuck in Molasses'). The Deep Freeze could drive a man insane in very short order, and was only able to be counteracted if other crewmen performed a 'Laying on of Hands' technique to give the victim strength and allow him to recover from his affliction. Unfortunately, two men burst into flames while Laying on of Hands, burning for 18 days despite all attempts to quench the fire.

Seeing the horrible after effects of the experiment, the Navy discontinued all further research into radar and optical invisibility. The surviving crewmen were discharged as mentally unfit for duty and many were placed in insane asylums. However, science was not quite done conducting research on electromagnetic fields or radar and its affects on the human mind. Project Rainbow may have been disbanded, but the Phoenix Project was just getting started.

Which made for one bad movie:


There's a web site for the "lone survivor" here, with a link to a synopsis of his tale here:


It was a project that evolved out of the Philadelphia Project. it was a project that the Navy did in the 1930's and 1940's in an attempt to make ships invisible. They threw the switch one eventful day and the ship went into hyperspace. They had all sorts of problems with the people on the boat. It was a huge success as well as a huge failure - then they shelved it.
***
What is the furthest anyone has traveled in the future?

Yes. It's a dreamlike reality. No one has picked up a tangible future beyond 2012 AD. There is a very abrupt wall there with nothing on the other side.

Prophecies speak of earth changes around then.

There is a Navy fact site on Philadelphia Experiment:


The ship involved in the experiment was supposedly the USS Eldridge. Operational Archives has reviewed the deck log and war diary from Eldridge's commissioning on 27 August 1943 at the New York Navy Yard through December 1943. The following description of Eldridge's activities are summarized from the ship's war diary. After commissioning, Eldridge remained in New York and in the Long Island Sound until 16 September when it sailed to Bermuda. From 18 September, the ship was in the vicinity of Bermuda undergoing training and sea trials until 15 October when Eldridge left in a convoy for New York where the convoy entered on 18 October. Eldridge remained in New York harbor until 1 November when it was part of the escort for Convoy UGS-23 (New York Section). On 2 November the convoy entered Naval Operating Base, Norfolk. On 3 November, Eldridge and Convoy UGS-23 left for Casablanca where it arrived on 22 November. On 29 November, Eldridge left as one of escorts for Convoy GUS-22 and arrived with the convoy on 17 December at New York harbor. Eldridge remained in New York on availability training and in Block Island Sound until 31 December when it steamed to Norfolk with four other ships. During this time frame, Eldridge was never in Philadelphia.
***
Supposedly, the crew of the civilian merchant ship SS Andrew Furuseth observed the arrival via teleportation of the Eldridge into the Norfolk area. Andrew Furuseth's movement report cards are in the Tenth Fleet records in the custody of the Modern Military Branch, National Archives and Records Admnistration, (8601 Adelphi Road, College Park, MD 20740-6001), which also has custody of the action reports, war diaries and deck logs of all World War II Navy ships, including Eldridge. The movement report cards list the merchant ship's ports of call, the dates of the visit, and convoy designation, if any. The movement report card shows that Andrew Furuseth left Norfolk with Convoy UGS-15 on 16 August 1943 and arrived at Casablanca on 2 September. The ship left Casablanca on 19 September and arrived off Cape Henry on 4 October. Andrew Furuseth left Norfolk with Convoy UGS-22 on 25 October and arrived at Oran on 12 November. The ship remained in the Mediterranean until it returned with Convoy GUS-25 to Hampton Roads on 17 January 1944. The Archives has a letter from Lieutenant Junior Grade William S. Dodge, USNR, (Ret.), the Master of Andrew Furuseth in 1943, categorically denying that he or his crew observed any unusual event while in Norfolk. Eldridge and Andrew Furuseth were not even in Norfolk at the same time.