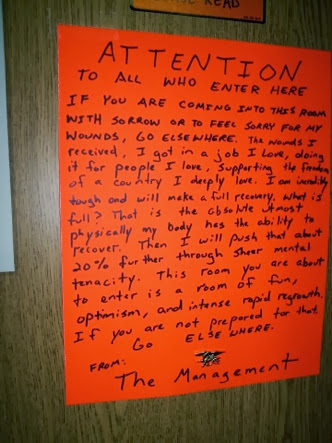 As Veteran's Day looms and wars go on, please join us live this Sunday at 5pm Eastern (don't forget to "Fall Back" for the time change) for Midrats "Episode 200: Navy SEALs in the Long War":


In an arch that spans the immediate post-Cold War era through the Iraq War, what are the observations and lessons of a front-line leader at the tactical level and, for those who are injured in service to their nation, through recovery. 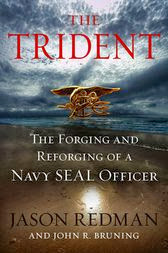 Our guest for the full hour will be Jason Redman, author of The Trident: The Forging and Reforging of a Navy SEAL Leader.

He deployed to Fallujah, Iraq in 2007, and in September was severely wounded. While recovering at Bethesda Naval Medical Center, Jason underwent 37 surgeries. His experience led him to create Wounded Wear, a Non-Profit organization that provides clothing kits and clothing modifications to America’s wounded warriors.

Some of you will remember Jason for the sign on his door at Bethesda which is replicated above.

Some of you may not of heard of him at all.

Here's your chance to get to learn more about him and his story.

Please join us live (or listen later) by clicking here.