Noted with only the comment in the header: Somali ex-pirate kingpin now leads anti-piracy fight:

According to the United Nations Monitoring Group on Somalia's 2012 report, Afweyne and his son Abdiqaadir were implicated in the hijackings of seven vessels between April 2009 and October 2012.

But after announcing in January that he was quitting his life of "gang activity" on the high seas, Afweyne has been engaged in efforts in the Mudug and Galgadud regions to reform more than 1,000 youths who have followed his lead and renounced piracy.

In an exclusive interview with Sabahi, Afweyne, now 60, denies having ever taken hostages or collected ransom money, but he says he regrets his past career and has put it behind him.

And a report about the EU, EU May Help Somalia Establish Coast Guard To Combat Piracy:


The European Union wants to help Somalia establish a coast guard service to combat piracy in the Horn of Africa.


UPDATE: Tales of the heroic Iranian Navy and its pirate stopping power here: 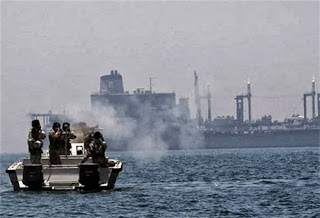 In relevant remarks late September, a senior Iranian Commander said that the Iranian fleets of warships deployed in the Gulf of Aden have escorted a total number of 1,538 cargo ships and oil tankers during their mission in the waterway.

"The Islamic Republic of Iran's Navy has escorted 1,538 cargo ships in the Gulf of Aden so far," Commander of the Iranian Army's 4th Naval Zone Admiral Khordad Hakimi told FNA in the Northern port city of Anzali.

He also said that pirates' attempts to hijack 112 cargo ships and oil tankers in international waters have been aborted due to the timely action of the Iranian warships deployed in the region.

Hakimi referred to the presence of the Iranian Navy's 27th flotilla of warships in the high seas to protect the country's cargo ships and oil tankers against pirates, and said the flotilla which is comprised of the Khark helicopter carrier and Sabalan destroyer has berthed in Sudan.

He called the Iranian Navy as an influential force, and said, "The Navy enjoys effective power in safeguarding domestic and international interests."