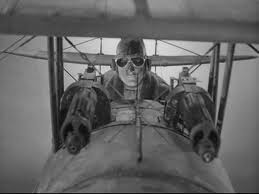 I see where CBS "News" posted a list of their "Best Films to Watch on Veterans Day", which is a list designed, I think to show veterans as damaged, broken people, or as CBS put it


In honor of those who have served in the military, we've compiled a list of films to commemorate Veterans Day. These movies aren't necessarily about war per se, but rather focus on the hardships and sacrifices servicemen and women face, be it on the battlefield or back home in civilian life.

So, all you broken, near (or soon-to-be ) crazed veterans will enjoy knowing that your family and friends will learn about your hardships, etc through this list:
What? No "Apocalypse Now?" No "Rambo?" Why not more crazy, inarticulate social outcasts? That is, to my mind, a horrible selection of films. On Veterans Day we do honor the wounded and shattered vets, but we also should honor all the other vets who served and returned home to become leaders in our towns and cities.

Of all of the CBS choices, for Veterans Day I would recommend only "The Best Years of Our Lives" because it is a great movie as it works through the confusion  and frustration of the returning veterans attempting to readjust to "normal" life after having lived on the edge for years.

My personal Veterans Day flick selections would include:
Whether in the front lines or in the backwaters, our veterans served this country. The vast majority returned with honor and without cases of the "crazy" too often depicted by our media. Depicted that way, I might add, because "crazy" is a better story than reporting on a vet who came back and built a successful career and family. So we give attention to the "homeless veteran" while ignoring the insurance salesman or plumber who fought in the same fights.

Is war hell? Is it madness? Does it bring out the best in some of us? I think my selection of movies helps answer those questions.