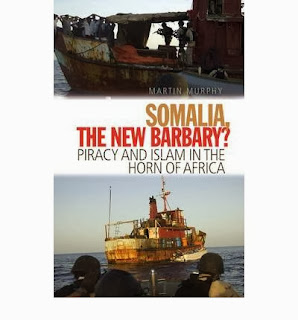 If you are looking for an excellent background read on the rise of the Somali pirates and their importance to the global economy, I highly recommend Martin Murphy's 2011 book Somalia: The New Barbary?: Piracy and Islam in the Horn of Africa.

As the blurb at Amazon says,


Martin Murphy, author of the definitive guide to modern maritime piracy and terrorism, employs his critically-acclaimed approach to review the history, motivation, organization, criminal methods, and operational tactics of Somali piracy, from its initial manifestation in the early-1990s to today. He links their activities and fortunes to the rise and fall of Somalia's political groups; explains how and why violent Islamists operate within Somalia; and outlines the extent to which they may exploit maritime dimensions in the future. He concludes with a consideration of the various political and military solutions being used to meet these challenges and whether they will resolve them effectively.

Obviously, this is not a new book and so the impact of armed security teams on merchant ships transiting the Somali pirate range is not covered. However, the analysis of the impact (or lack thereof) of naval forces is spot on and the warnings of future failed states near sea lines of communication should be given attention. Or, in his words:


Somali piracy represents the most significant challenge to maritime security since the end of World War II; or, perhaps more precisely,  the most substantial threat to the freedom of maritime trading nations to conduct their lawful pursuits peacefully.

He notes that the rise of Somali pirates has revealed something interesting - "the world is poised on the verge of a new global maritime order."

His discussion of the US Maritime Services "A Cooperative Strategy for 21st Century Seapower" continues that thought with a look at that strategy on the Chinese:


Their reaction spurs the thought that China is aware of how much it lost over the centuries by not remaining a maritime and trading nation, while American no longer realizes how much it owes to both.


I agree, and his analysis is very much worth the read.