I am not going to replicate the excellent coverage of Operation Damayan, the U.S. Navy and Marine Corps efforts in the Philippines as they "assist" with post-typhoon recovery efforts. For many great stories, the very best site is the Navy.mil Home Page.

It appears that about 1/10 of the U.S. fleet eventually will be participating in these efforts. Unlike a hurricane hitting a major land mass in which over land transport may be restored, the Philippines presents a challenge since it consists of a huge number of islands and water transport is the key to normal life as well as to disaster relief efforts.

As with the "Christmas Tsunami" in 2003-2004, it's "logistics, logistics, logistics" that is the issue, and the U.S. fleet seems to be everyone's "first responder." While it is encouraging that Japan and so many other countries are pitching in their resources, the "international community" could, as I noted about 10 years ago, should really do some advance work in anticipation of what are, after all, common and frequent disasters:


The UN seems incapable of learning from its past failings. Why are there not ships preloaded with the sorts of emergency equipment that might be needed if a major earthquake hits Japan or the Philippines or Nicaragua? Why does the UN not have the humanitarian equivalent of the U.S. military's prepositioned ships? Load up their hulls with water purifiers, medicine, cranes, backhoes, fuel, generators, tents, food, heavy lift vehicles, jeeps, helicopters, field hospitals, etc. Then wait for the inevitable disaster. Have two or three sets of ships - South America, Asia, Africa.

I understand the way the UN operates that it is rarely necessary to justify the high salaries of UN employees, but if it was necessary, it would be interesting to see if they have a disaster contingency plan worth a portion of that pay that involves something other than, "Announce disaster in horrific terms. Wait for the U.S. to respond. Claim credit for responding." 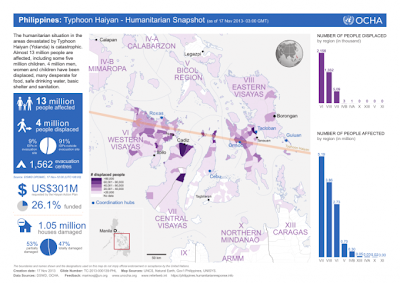 
UNICEF is working with the government and partners to identify air cargo capacity for the transportation of humanitarian personnel and life-saving supplies.

More from the UN here:


The humanitarian situation in the areas devastated by Typhoon Haiyan (Yolanda) is catastrophic. Almost 13 million people are affected, including some five million children. 4 million men, women and children have been displaced, many desperate for food, safe drinking water, basic shelter and sanitation.

And the elements of the UN "Action Plan" here:


Existing information and field observations suggest that the most immediate threats to life are (in rough order of urgency):

Key capabilities immediately needed to enable fast action to address these include:


Medium-term threats to health, dignity and security include:

- Lack of access to primary and specialised health care
- Moderate acute malnutrition
- Psycho-social malaise
- Disruption of education, entailing loss of protective daytime environment for children
- Disruption of livelihoods, which will worsen general deprivation and add to humanitarian needs as soon as coping mechanisms have been exhausted.

My highlights are to point out the key logistics issues.

I attach the plan because I'll be darned after my hasty reading if I can find any reference to the U.S. ( or any other country's) civil-military contribution in the Plan. I am prepared to be corrected.