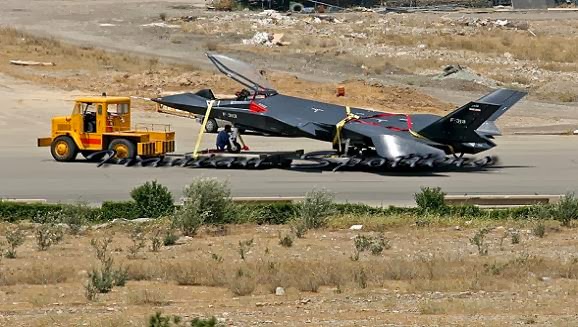 Sure, this is supposed to show off the "F-313 Stealth Fighter Jet", but no one tows an operational aircraft on baggage carts, do they?

So, what we are seeing (in addition to the alleged stealth fighter (which has already been properly mocked)), I think we may be seeing a new Iranian aircraft carrier system. Look at the picture above (from "Iranian Spotters" via The Aviationist via Pakistan Defense Forum, etc) and compare it to a U.S. aircraft being towed by a similar tow tractor below:

So, if the Iranians are being very, very truthful (are you holding your breath waiting for that?) and their F-313 is anything more than a large plastic model which lacks a steerable front wheel (see comments to The Aviationist post), wouldn't one expect it to be towed like the older U.S. Navy aircraft in the second photo?

Sure, unless the secret here is in the tow carts and the tractor pulling them. I think the real secret tech in this photo lies in those carts, which I suspect are some sort of launch device capable of getting an aircraft without a steerable front landing gear into the air. I mean, look at those tie downs - they have to restrain this heavy fighter from lifting off from those carts even as the "aircraft carrier" is headed uphill with two launch techs riding on the lead cart and the canopy propped open . . .

I'm still working on a theory of how they get a plane to land back on the carts, but perhaps they just match speeds with the carts and tractor so the plane just drops into place.