For those who live in tornado country or happen to be passing through it, one issue that pops up repeatedly is how to react to a tornado event while on the road. One common reaction is to take a look at those massive highway overpass bridges and think they are just the ticket to safety.

However, there is an older NOAA study that suggests that might be a really bad idea. See Highway Overpasses as Tornado Shelters: Fallout From the 3 May 1999 Oklahoma/Kansas Violent Tornado Outbreak.

The State of Ohio agrees: 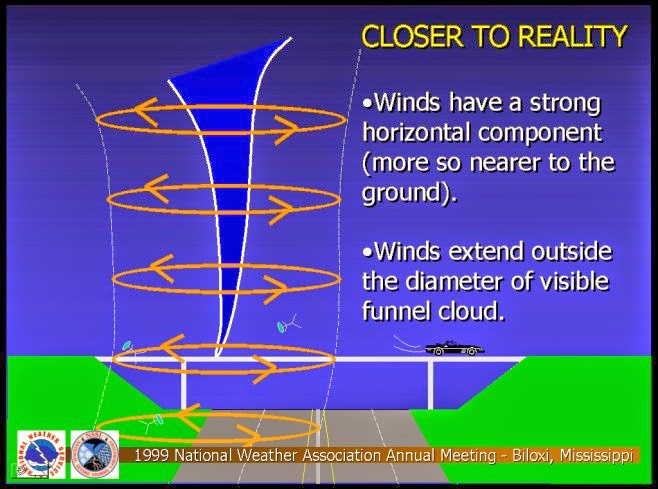 Many people mistakenly think that a highway overpass provides safety from a tornado. The reality is: an overpass may be one of the worst places to seek shelter from a tornado. An overpass as tornado shelter can put people at a greater risk of being killed or seriously injured by flying debris from the powerful tornado winds.

Wind speeds in tornadoes can exceed 200 mph. These destructive winds produce airborne debris that are blown into and channeled under the overpass where people might try to seek shelter. Debris of varying size and types, including dirt, sand and rocks, moving at incredible speeds can easily penetrate clothing and skin, causing serious injuries and possibly death. Very fine debris can also be forced into eyes, causing injury or loss of sight. A person can even be blown out or carried away from the overpass by the fierce tornado winds. If a person is positioned at the top of an overpass, he/she could encounter even higher wind speeds and more missile-like debris. Wind direction will also shift abruptly as the tornado passes, tossing debris from all sides.