Disaster Relief: It's Always About Logistics 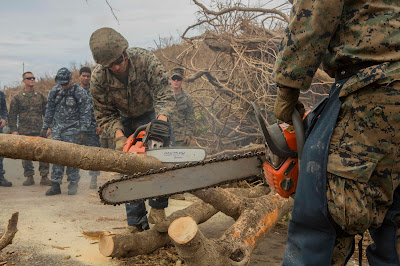 Logistics, logistics, logistics. Some excellent points about the problems of Puerto Rico and the issues faced in getting assstiance to the population at Breaking: Trump waives Jones Act for Puerto Rico which quotes a Bloomberg piece by Laura Blewitt Mountains of Aid Are Languishing on the Docks in Puerto Rico which, as the title suggests, states the issues concerning aid are not in the delivery to the island, but in the infrastructure of the island:


There are plenty of ships and plenty of cargo to come into the island,” said Mark Miller, a spokesman for Crowley, based in Jacksonville, Florida. “From there, that’s where the supply chain breaks down -- getting the goods from the port to the people on the island who need them.”
***
The buildings that would receive supplies are destroyed and without electricity, Miller said. The transport companies that have staff available and diesel on hand encounter downed poles and power lines while navigating 80,000-pound tractor-trailers on delicate washed-out roads.

“It’s one thing to move a little car through there,” Miller said. “It’s another to move a semi truck.”

Russel L. Honore, a retired Army lieutenant general who took over the federal response to Hurricane Katrina in 2005, said the efforts in Puerto Rico require what he called "expeditionary logistics" -- ships, aircraft and trucks that can move goods onto and around the island.
“

By the way, while the government recommends 3 days worth of food and water per person (and pet), the reality is that you are far better off planning on 7 to 10 days without power, water and food from other than your own supplies.