As the Syrian conflict enters what looks to be its end game, one old player on the scene is emerging stronger than it has ever been, a point of concern for all the nations in the area.

How has the Syrian civil war changed Hezbollah and her allies, and what does it signal about the post-war order?

To discuss this and related issues will be our guest for the full hour, Solume Anderson.

Solume is journalist and author based between New York City and Beirut, Lebanon. An 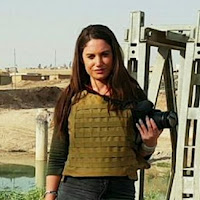 alumna of Columbia University’s Graduate School of Journalism. She writes regularly for publications including Newsweek, The Atlantic, New York, Harpers, Foreign Policy, VICE, Village Voice and Vox.com. Her first book, The Hostage’s Daughter was published in 2016.

We will use her latest article, Hezbollah’s New Strength Leaves Israeli Border Tense, as a starting off point for our conversation.