Fuel From Sea Water? Navy Research Lab Has a Patent


The world’s oceans cover approximately 70 percent of Earth’s surface and contain roughly 93 percent of the planet’s carbon dioxide (CO2). With around 38,000 gigatons (Gt) of carbon, our world’s oceans contain 16 times as much carbon as that found on land or in the atmosphere combined. 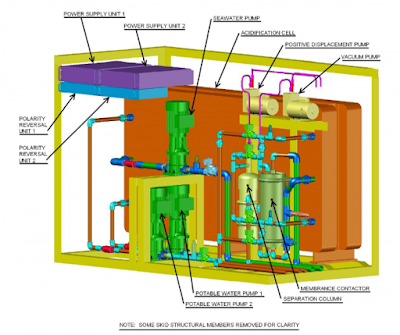 “With greater attention being directed at mitigating the effects CO2 can have on the environment, an interesting and attractive alternative is to recycle the gas into energy-rich molecules,” said Dr. Heather Willauer, research chemist, U.S. Naval Research Laboratory (NRL). “The process, based on Fischer–Tropsch technology, is CO2 neutral and eliminates the emission of sulfur and nitrogen compounds that are produced from the combustion of petroleum derived fossil fuels.”

Building on the concept of capturing this natural resource, researchers at NRL have developed and received patent 9,719,178, issued Aug. 1 by the U.S. Patent and Trade Office (USPTO), for an electrolytic-cation exchange module (E-CEM). Under this design, the E-CEM is capable of both producing hydrogen (H2) and simultaneously extracting CO2 from seawater.

“In our previous work, the initial scale-up and integration of the E-CEM into a skid platform provided us the data needed to establish faster acidity equilibrium for future modules and improve energy efficiencies and production,” said Willauer. “This technology provides the Navy the capability to produce fuel stock, at sea or in remote locations, for the production of synthetic LNG, CNG, F-76, and JP-5 petroleum products.”

Located at NRL's Marine Corrosion Facility, Key West, Florida, the next generation, modified E-CEM, demonstrates the progressive steps forward toward integrating and commercializing these systems. The result, at present, is a 33 percent improvement in production time of CO2 and H2 with a feedstock production rate of a single E-CEM capable of producing more than one gallon of fuel per day — contributing to the removal of nearly five tons of CO2 per year.(emphasis added)


Well, cleans up the CO2, produces hydrogen for fuel as well as carbon. Sounds like a winner.

Producing fuel at sea? Time for that Arthur C. Clarke quote: "Any sufficiently advanced technology is indistinguishable from magic."
Posted by Mark Tempest at 10/04/2017 04:31:00 PM

Email ThisBlogThis!Share to TwitterShare to FacebookShare to Pinterest
Labels: Technology is our friend