U.S. Navy Has a Coastal Mine Detection System 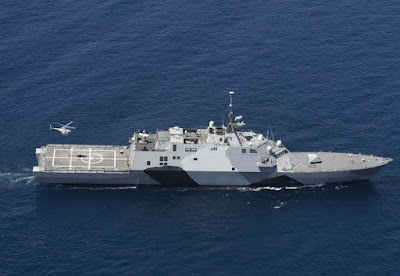 U.S. has a coastal mine detection system reports Megan Eckstine at USNI News


The Navy completed the first phase of its initial operational test and evaluation on the AN/DVS-1 Coastal Battlefield Reconnaissance and Analysis (COBRA) airborne mine detection system and is awaiting Littoral Combat Ship availability to complete the remaining testing.

COBRA is a sensor payload that operates onboard the MQ-8B Fire Scout and can detect beach zone mines in the daytime to help plan amphibious landings. An eventual block upgrade would add nighttime and surf zone detection capabilities.
***
Using air vehicle operators and mission payload operators from Air Test and Evaluation Squadron (VX) 1, maintainers from Helicopter Sea Combat Squadron (HSC) 21 and operators from USS Independence (LCS-2) and the LCS Squadron (LCSRON) 1, the LCS program proved to the Operational Test and Evaluation Force that COBRA can effectively and reliably meet its mission requirements.

“Right now, in order for us to do the kind of reconnaissance you need in advance of an amphibious landing, you’ve got to put sailors and Marines, you’ve got to put somebody in there with eyes on target to see what’s there, see if there’s any obstacles. People are involved in it,” Taylor said.
“With this capability, you’re able to go from the LCS with an unmanned vehicle, you’re able to recon a whole line of beach – not just one or two areas, you can look at the whole beach, you can look at all the lanes that are possible without putting somebody there – which allows you to come back and look at that and choose which lane or lanes are available and which are not.”


The COBRA airborne payload will be carried on the MQ-8 Fire Scout unmanned air system. This allows operators and other personnel to remain at a safe distance from the mine and obstacle belts and enemy direct and indirect fire. COBRA will be embarked in the Littoral Combat Ship (LCS) as part of the mine countermeasures (MCM) mission package (MP).

Wonder who will protect the LCS at its "safe distance." And what is that distance in today's battlespace?