The General Board of the Navy existed for the first half of the 20th Century. In his latest

book, America's First General Staff: A Short History of the Rise and Fall of the General Board of the U.S. Navy, 1900-1950, our guest Dr. John T. Kuehn describes how the Board, a creature of its time born from a defined need following the "last war," became the organization that drove the growth of a world class navy and brought together the best in naval thought and strategic thinking.

For the full hour we'll examine its rise and fall, successes and failures, as well as the lessons it may teach us today. 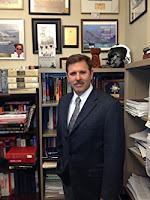 Dr. Kuehn is the General William Stofft Chair for Historical Research at the U.S. Army Command and General Staff College. He retired from the U.S. Navy 2004 at the rank of commander after 23 years of service as a naval flight officer in EP-3s and ES-3s. He authored Agents of Innovation (2008) and co-authored Eyewitness Pacific Theater (2008) with D.M. Giangreco, as well as numerous articles and editorials and was awarded a Moncado Prize from the Society for Military History in 2011.

His previous books include Napoleonic Warfare: The Operational Art of the Great Campaigns and A Military History of Japan: From the Age of the Samurai to the 21st Century as well as numerous articles and editorials. He was awarded a Moncado Prize from the Society for Military History in 2011.