This Sunday we're going to convice you to make plans to be in Annapolis next month.

Coming up Saturday, Nov. 18, from 12 - 5 p.m. Eastern, our friend Claude Berube is husbanding the Naval Academy Museum's latest effort in what promises to be a very original and entertaining conference, NavyCon.

NavyCon has a great line up to discuss how fleet forces have been portrayed in science fiction, in comparison to our Navy today. 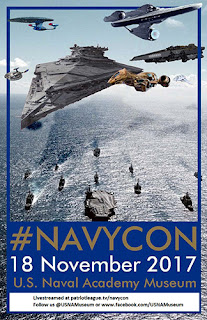 It kicks off with former NASA astronaut and Naval Academy Class of 1981 graduate, Capt. Kay Hire, on “NASA Today and Tomorrow.” Other speakers include the current Director of the Defense Strategies and Assessments Program at the Center for a New American Security, Dr. Jerry Hendrix, the former Program Manager of the U.S. Navy’s DDG-51 program, Captain Mark Vandroff, and “Service, Citizenship and ‘Starship Troopers,’” will be delivered by Congressman Mike Gallagher, who served as a Marine in Iraq. The concluding address will be given by the author of the best-selling “Honor Harrington” science fiction series, David Weber.

We will have Midrats regulars USNA Museum Director Claude Berube, LCDR USNR - Senior Fellow at CNAS Jerry Hendrix, CAPT USN (Ret) - and Mark Vandroff, CAPT USN, CO of NSWC Carderock and former DDG51 Program Manager to come on to discuss their part, do a little geek’n on Midrats time, and generally get you ready for NavyCon. ...and no, that isn't too much Navy for you. You can never have too much Navy.

We’ve got them for the full hour, don’t miss it!