Thirty-five men being held in India were on Monday acquitted of illegal possession of arms while they were on a U.S.-operated anti-piracy ship in 2013.

The six Britons, three Ukrainians, 14 Estonians and 12 Indians were 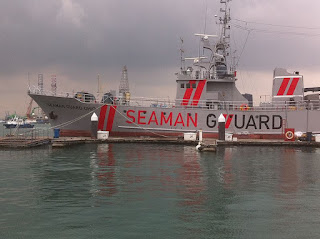 The Indian coast guard intercepted the privately run MV Seaman Guard Ohio off the coast of Tuticorin in Tamil Nadu in October 2013.

Semi-automatic weapons and thousands of rounds of ammunition were found.

The crew members were charged with not having proper paperwork to carry weapons in Indian waters, but India has faced intense diplomatic pressure over the case ever since.

R. Subramaniya Adityan, a lawyer for 19 of the crew, said after Monday’s hearing at the Madras High Court that the men “will be released after the court order reaches the prison officials on Tuesday.”

One of the risks of private security company (PSC) anti-piracy units is having to deal with the laws of the various states through whose waters ships carrying the PSC must transit. Especially those states very sensitive about threats posed by units of armed, well-trained men.

That being said, four years is a long time to deal with what should have been a matter easily disposed of.