Not So Far-Fetched - "Space Militias?"

Is the U.S. ready for China’s ‘space militias’? asks Adam Routh at SpaceNews:

Economic interests in space continue to rise. In 2016 the global space economy represented $329 billion, and 76 percent of the total was produced through commercial efforts. With some of the most lucrative endeavors like asteroid mining, space tourism, micro satellites, and space colonies still in the early stages of development and application, it’s no wonder economic projections estimate the space sector will grow to $2.7 trillion over the next three decades.

Nations’ militaries will continue to protect vital economic interests, and outer space will be no exception. But how will it happen? Will the United States see peer competitor militaries expand more aggressively into outer space? The answer lies in gray zone tactics and space militias.

The operational complexities of the space environment coupled with poorly defined international norms and laws will likely encourage U.S. adversaries to use gray zone tactics. Chinese maritime militias provide a likely model.
***
Space militias could operate much in the same way maritime militias act currently. Space militias will be commercial (or at least appear to be commercial) spacecraft supporting commercial activities but when directed by their government will quickly adjust and adopt a more military or law enforcement like role. The United States should expect these space militias to defend territory, provide situational awareness, and even attack other spacecraft through a variety of anti-satellite systems, but instead of people, these commercial spacecraft will rely on automation and artificial intelligence for basic operations. Without human life at stake risk tolerance will surely increas


Before the recent NavyCon at USNA, we discussed some of this on Midrats:

It was discussed at NavyCon, too.

And a modest discussion of space exploration, asteroid mining and such stuff at Space Exploration: Inflatable Habitat Ready for Space Station Trip:


"It will," the old man promised. "Funny—not so long ago people thought that space ships would have to be really rigid—all metal. So how did they turn out? Made of stellene, mostly—an improved form of polyethylene—almost the same stuff as a weather balloon." 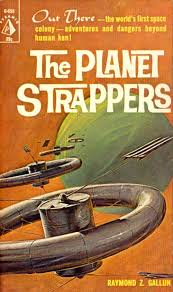 The quote is from The Planet Strappers by Raymond Z. Gallun (1961). As I recall it featured some sort of space piratea. A more contempory cite might be The Expanse.

UPDATE: Jerry Hendrix notes his CNAS report From Blue to Black
Applying the Concepts of Sea Power to the Ocean of Space written with Michelle Shevin-Coetzee: