Please join us at 5pm EST (don't forget to set your clock back) on 5 Nov 2017 for Midrats Episode 409: USS FITZGERALD & MCCAIN Collisions; Observations with Bryan McGrath

This week saw the release of the reports on the collision reports and Comprehensive Review of the incidents this summer between merchant ships in WESTPAC and the destroyers USS FITZGERALD and USS MCCAIN.

The totally avoidable collisions resulted in the death of 17 Sailors and removal from our most important theater two of our most critical assets.

Our guest for the full hour will be Bryan McGrath, CDR, USN (Ret.).

Bryan grew up in Mount Laurel, New Jersey, and graduated from the University of Virginia in 1987. He was commissioned upon graduation in the United States Navy, and served as a Surface Warfare Officer until his retirement in 2008. At sea, he served primarily in cruisers and destroyers, rising to command of the Destroyer USS BULKELEY (DDG 84). 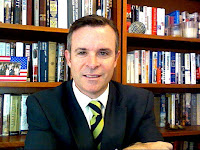 During his command tour, he won the Surface Navy Association’s Admiral Elmo Zumwalt Award for Inspirational Leadership, and the BULKELEY was awarded the USS ARIZONA Memorial Trophy signifying the fleet’s most combat ready unit. Ashore, Bryan enjoyed four tours in Washington DC, including his final tour in which he acted as Team Leader and primary author of our nation’s 2007 maritime strategy entitled “A Cooperative Strategy for 21st Century Seapower.”

He is the Assistant Director of Hudson Institute’s Center for American Seapower, and he is the Managing Director of The FerryBridge Group LLC, a small defense consulting firm.