As briefly mentioned during our 7 April Midrats here, a discussion of how to effectively use our Navy Reserve for maritime purposes touched on Trump's Gunboats by Claude Berube and contributed to by me. I think this part of the discussion begins around the 46:21 point.

A key element of growing our fleet without breaking the budget (more than it is already), is distributed lethality among a larger force, a part of which should be designed and trained for warfare in the "green water" areas of the world (where most sea battles historically have been fought) and procured from existing U.S. shipbuilders at relatively minimal cost. It is that area the LCS was supposed to operate in before it was designed by a committee and became whatever it is. Let me offer up some quotes from the Gunboats article: 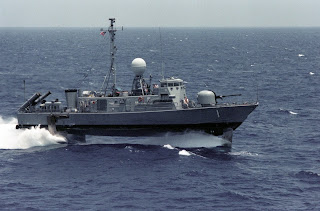 ... It may be time for the U.S. Navy to go smaller in order to get bigger, sooner while waiting for the warm lines of present production to turn hot on longer lead time ships. The question of how to do this has been answered before in our history: use commercially proven hulls and adapt them to Navy use in nearly every conflict from the American Revolution to World War II. This surge in smaller, commercially-built vessels not only has historical precedence but satisfies growing global maritime challenges as well as domestic employment.
***
... Were billion dollar warships necessary for combating piracy off the Horn of Africa? In a Navy where the only tool is a hammer most every solution is an overly-excessive naval force. .... Instead of continuing to use the wrong tool for the job, it is logical to develop a diverse force of smaller naval ships to handle numerous, smaller missions, leaving the blue water navy to pursue the larger, vital warfighting role that it was designed to do. Smaller navy vessels working in squadrons may be more cost-effective in responding to global maritime incidents, patrolling coasts, and deterring similar forces. While the threat of Somali piracy has diminished the destabilization of other economies and nations could cause new threats to shipping to emerge as off Venezuela. Larger threats continue to loom as small Iranian boats swarm U.S. Navy ships in the Strait of Hormuz and China’s maritime militia in the South China Sea have harassed ships in the past. Rather than offering larger, single targets of opportunity, dispersed squadrons of smaller vessels provide greater opportunities to counter asymmetric operations.
***
In his July 2012 USNI Proceedings article “Payloads over Platforms: 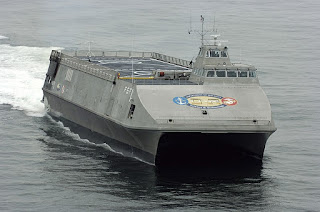 Charting a New Course,” then Chief of Naval Operation Admiral Greenert wrote, “We need to move from ‘luxury-car’ platforms—with their built-in capabilities—toward dependable ‘trucks’ that can handle a changing payload selection. “Sea trucks” is the perfect way in which to picture arming the smaller ship force. There already exist large numbers of “bolt on” modular weapons systems and sensor packages that could allow a squadron of such ships to present a challenge to any potential foe, ranging from anti-ship and anti-aircraft missiles to various form of autonomous vehicles with many mission capabilities. The addition of helicopters to the mix adds both a counter-surface and ASW capability; the same is true for drones. A lightweight modular force means that a small squadron could form a formidable presence at a relatively low cost.
***

It's not like this is new concept here or at other locations, see, e.g. Psst.Psst. Wanna Distribute Your Lethality on the Cheap? and the links therein:


The underlying goal, of course, was to suggest a way of getting lots more platforms out there - with lots more weapons and capabilities. Cheaper, faster, and, if not better, certainly "good enough."

One problem has been that the Navy leadership and Congress have become very risk averse - and they dread the idea that smaller ships may be more vulnerable than bigger ships, which might result in the politically unacceptable loss of personnel. If "politics ain't beanbag" as Mr. Dooley put it, these folks need to understand that neither is war fighting. Our young officers and sailors understand that, especially after our involvement in the Middle East in which we have been placing our people at risk almost continuously since the "tanker war" began in 1987.

What we owe these volunteers is a large enough force 'right-sized" to meet the existing and potential threats to the areas of the world that are vital to our national interests. To accomplish this, we need to be bold enough to allow the folks who can understand and apply current technology to the problem of maintaining vital sea lines of communication. Armed UAVs operating in swarms from small decks may be answer to some issues, wise and wide use of UAVs, USVs, and UUVs may allow for especially good threat warning and targeting for a flotilla of small missile carrying high speed craft or other craft that carry lots of missiles and drones. We need to put good minds into brainstorming these and other possibilities.

And we need to do it now, before we get locked into being all "big decks" and having to deal with the risks that putting so many eggs in so few baskets that the loss of one ship spells catastrophe for the fleet.

Captain Wayne Hughes discussed some of this on Midrats back 6 years ago:


Nothing wrong with going back and revisiting Sea Fighter or even the hydrofoil missile boats of the past, both of which are pictured above.