The actual quote from the Chinese propaganda source "Global Times" is 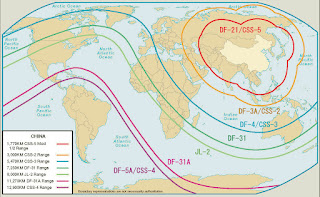 Beijing-based military expert Li Jie told the Global Times that the US is attempting to show off its military capability to the world, threaten China and enforce its hegemonic policies.

The South China Sea is fully within the grasp of the Chinese People's Liberation Army (PLA), and any US aircraft carrier movement in the region is solely at the pleasure of the PLA, which has a wide selection of anti-aircraft carrier weapons like the DF-21D and DF-26 "aircraft carrier killer" missiles, analysts noted.

In response to the Pentagon's statement, Chinese Foreign Ministry spokesperson Zhao Lijian said at a regular press conference on Friday that Xisha Islands are indisputably China's inherent territory. China's military exercises in the seas off Xisha Islands are within our sovereignty and beyond reproach. The fundamental cause of instability in the South China Sea is the large-scale military activities and flexing of muscles by some non-regional country that lies tens of thousands of miles away.

Since the phrase "global commons" seems to be one that the Chinese government needs to learn, here's one from a UN document -


the global commons – those resource domains that do not fall within the jurisdiction of any one particular country, and to which all nations have access

More specifically, from the UN Convention on the Law of the Sea (UNCLOS) regarding the "High Seas:"

Application of the provisions of this Part

The provisions of this Part apply to all parts of the sea that are not included in the exclusive economic zone, in the territorial sea or in the internal waters of a State, or in the archipelagic waters of an archipelagic State. This article does not entail any abridgement of the freedoms enjoyed by all States in the exclusive economic zone in accordance with article 58.

Freedom of the high seas

1. The high seas are open to all States, whether coastal or land-locked. Freedom of the high seas is exercised under the conditions laid down by this Convention and by other rules of international law. It comprises, inter alia, both for coastal and land-locked States:

(a) freedom of navigation;

(b) freedom of overflight;

(e) freedom of fishing, subject to the conditions laid down in section 2;

Reservation of the high seas for peaceful purposes

The high seas shall be reserved for peaceful purposes.

Invalidity of claims of sovereignty over the high seas

No State may validly purport to subject any part of the high seas to its sovereignty.

Further, China's efforts to assert sovereignty over the area enclosed by its magical "9 Dashed Line" map has been rejected, as set out here: 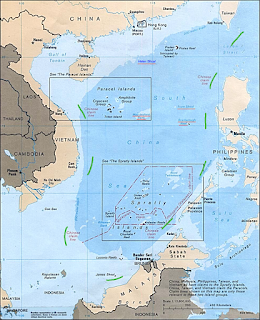 An international tribunal in The Hague delivered a sweeping rebuke on Tuesday of China’s behavior in the South China Sea, including its construction of artificial islands, and found that its expansive claim to sovereignty over the waters had no legal basis.

The landmark case, brought by the Philippines, was seen as an important crossroads in China’s rise as a global power and in its rivalry with the United States, and it could force Beijing to reconsider its assertive tactics in the region or risk being labeled an international outlaw. It was the first time the Chinese government had been summoned before the international justice system.

In its most significant finding, the tribunal rejected China’s argument that it enjoys historic rights over most of the South China Sea. That could give the governments of Brunei, Indonesia, Malaysia, Taiwan and Vietnam more leverage in their own maritime disputes with Beijing.

The tribunal also said that China had violated international law by causing “irreparable harm” to the marine environment, endangering Philippine ships and interfering with Philippine fishing and oil exploration.
***
The main issue before the panel was the legality of China’s claim to waters within a “nine-dash line” that appears on official Chinese maps and encircles as much as 90 percent of the South China Sea, an area the size of Mexico. The Philippines had asked the tribunal to find the claim to be in violation of the United Nations Convention on the Law of the Sea, which both China and the Philippines have ratified.

In its decision, the tribunal said any historic rights to the sea that China had previously enjoyed “were extinguished” by the treaty, which lays out rules for drawing zones of control over the world’s oceans based on distances to coastlines. The panel added that while China had used islands in the sea in the past, it had never exercised exclusive authority over the waters.

The panel also concluded that several disputed rocks and reefs in the South China Sea were too small for China to claim control of economic activities in the waters around them. As a result, it found, China was engaged in unlawful behavior in Philippine waters, including activities that had aggravated the dispute

As noted in that article, there is no enforcement mechanism for the ruling - except, it would seem, for all the other responsible nations of the world to continue to treat the Chinese claims as bogus and keep treating the bulk of the South China Sea as "high seas" over which China has no sovereign
rights.

Recently, India, has stated, according to the Times of India the South China Sea is an international waterway and part of the "global commons:"


Responding to questions on the security situation in South China Sea (SCS), the government on Thursday said its position had been clear and consistent the SCS was a part of global commons and India had an abiding interest in peace and stability in the region.

“We firmly stand for the freedom of navigation and overflight and unimpeded lawful commerce in these international waterways, in accordance with international law, notably UNCLOS,” said the MEA spokesperson.

China may or may not have the capability to do damage to U.S. and other forces operating in the South China Sea, but their blunt force approach to trying to enforce an illegal claim of sovereignty over big portions of the "high seas" by their smarmy threat of violence simply indicates the true nature of their corrupt government.
Posted by Mark Tempest at 7/17/2020 01:23:00 PM