Much to the total lack of surprise for the various bosses I've had in my life, I don't like being forced to do things - especially things that seem to be simply mindless incantations that show -what? Loyalty? Patriotism? Group Spirit?

Perhaps I should explain a little. I confess that I have never liked saying the Pledge of Allegiance (only officially adopted in 1942, by the way).

You want to ask me if I will support and defend the Constitution? Sure, and I have so sworn on several occasions - each fraught with much more meaning than a mindless rote recital in the morning at school. The history of the Pledge is interesting, by the way.

I think West Virginia State Board of Education v. Barnette, which did away with a mandatory requirement that students recite the Pledge is absolutely correct. Freedom means freedom to act and think for yourself, not "freedom to conform." As Justice Jackson wrote in that case:


The freedom asserted by these appellees does not bring them into collision with rights asserted by any other individual. It is such conflicts which most frequently require intervention of the State to determine where the rights of one end and those of another begin. But the refusal of these persons to participate in the ceremony does not interfere with or deny rights of others to do so. Nor is there any question in this case that their behavior is peaceable and orderly. The sole conflict is between authority and rights of the individual. The State asserts power to condition access to public education on making a prescribed sign and profession and at the same time to coerce attendance by punishing both parent and child. The latter stand on a right of self-determination in matters that touch individual opinion and personal attitude.
***
The very purpose of a Bill of Rights was to withdraw certain subjects from the vicissitudes of political controversy, to place them beyond the reach of majorities and officials, and to establish them as legal principles to be applied by the courts. One's right to life, liberty, and property, to free speech, a free press, freedom of worship and assembly, and other fundamental rights may not be submitted to vote; they depend on the outcome of no elections.

I confess, to my way of thinking,  that if you want to teach children (or adults for that matter) about the beauty of our Constitution you explain to them that they have the right to not to submit to authority in cases where their rights do not infringe on the rights of others. That our republic is founded on those individual rights that cannot be stripped from us.

Which bring me to another thing I must confess to - I believe the National Anthem should not be played before sporting events. A history of how it came to be played can be found here.

Now, I love the National Anthem, but I just happen to believe that it ought to be played on special occasions like the Fourth of July say or Constitution Day . . . I guess that's why I find the "stand or kneel" thing before a game of some sort controversy so silly. Just quit playing the anthem (any anthem) and play ball when ready. After that, any political grandstanding is just that. 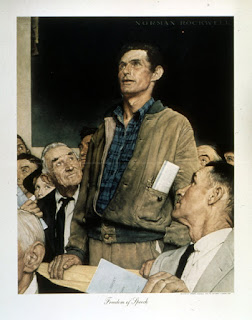 What? - you don't hold a Constitution Day parade? or family ceremony with the reading of the Constitution and Amendments and an oath taking to protect and defend it from all enemies, both foreign and domestic? You could even use this one from the U.S. House of Representatives:


“I, AB, do solemnly swear (or affirm) that I will support and defend the Constitution of the United States against all enemies, foreign and domestic; that I will bear true faith and allegiance to the same; that I take this obligation freely, without any mental reservation or purpose of evasion, and that I will well and faithfully discharge the duties of the office on which I am about to enter. So help me God.”

What office do you hold? The true "highest office in the land" - that of "United States citizen. "

It's for you all the federal and state employees and officials (including those appointed or elected) work. When elected officials put on airs, they forget to whom they are obligated for their temporary position.

You need to do your job, too, by discharging your duties to vote and to take action when your employees fail to do theirs.

By the way, Constitution Day is September 17, if you were wondering.

Perhaps by now you might getting the idea. If you try to force me to do something I don't want to do anyway - you won't get far.