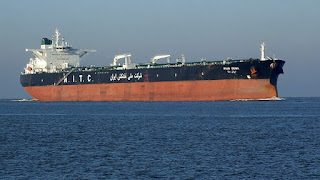 The island nation of Palau says a tanker that recently loaded Venezuelan crude was using a false signal to disguise its identity, potentially putting the Pacific country in the crosshairs of U.S. sanctions.

“It appears that this vessel is claiming to be registered with the Palau International Ship Registry. This claim is false,” Palau’s ministry of state said in the note to Venezuela’s foreign affairs ministry. “It therefore appears that the vessel is using a falsified AIS signal in order to mask its true identity.” The letter was delivered to several Venezuelan embassies, including the one in Tokyo, says Steven Kanai, a special assistant to Palau’s president on international maritime matters and foreign relations.

The tanker that loaded in Venezuela was using a practice known as “spoofing,” where vessels send a signal with another ship’s registration number under the maritime industry’s Automatic Identification System, according to London-based ship tracker Windward Ltd. If so, it would represent a new tactic in the cat-and-mouse maneuvers deployed by companies trading oil with Venezuela in defiance of U.S. sanctions.

Over the past six months, the names of 13 vessels that are registered as broken-up appeared in Venezuelan crude-loading programs seen by Bloomberg. The Ndros, though, was the only one among those names to appear off the coast of Venezuela by satellite signal.

When originally developed, the sole purpose of Automatic Identification Systems (AIS) was to enable vessels to see one another at sea, thereby avoiding collisions. With time, AIS use has evolved, and with it, the reliance vessels have on it. Today, governments and security agencies use AIS to detect and prevent illicit activities at sea, and private organizations use AIS data as a crucial element of their due-diligence process.

Following the 2012 sanctions placed on Iran, AIS manipulations rose drastically, creating a new wave of problems for enforcement agencies. Iranian tankers, no longer able to enter international ports, simply changed their flags and entered international ports under false pretense. This brought to light the ease with which bad actors could manipulate AIS data as well as the growing need for alternative monitoring and security tools.

As bad-actors continually seek new ways to engage in AIS spoofing and exploit vulnerabilities, any business looking to protect its assets must stay one step ahead of the game; that means having the best technology do what it was designed to do, and having the right tools at hand to keep any unwanted players out of their waters.

Gee, who would have guessed that Iran, the NORKS, and Venezuela would be involved in such antics?