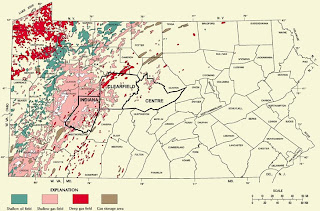 As reported here, one of the results of higher oil prices is a drive to get oil that was too expensive to go after before the prices increased:

Not since 1859, when Edwin Drake drilled the world’s first oil well at Titusville, Crawford County, has there been so much interest in non-coal energy deposits in Pennsylvania.

The state Department of Environmental Protection has issued about 4,500 oil and gas drilling permits in each of the last two years. And now geologists at Penn State University and the State University of New York, Fredonia, say that roughly 50 trillion cubic feet of natural gas is recoverable from a vast geological formation known as the Marcellus shale.
***
The Marcellus shale, about 6,000 feet underground in most places, covers 54,000 square miles, running in a northeast-southwest direction from the Southern Tier of New York, across Pennsylvania into Ohio and West Virginia. Bradford County is among those where prospecting and some drilling is occurring.

Terry Engelder, Ph.D., a geologist at Penn State, has estimated that the total amount of natural gas in the Marcellus shale is somewhere between 168 trillion and 516 trillion cubic feet. About 10 percent of a known reserve usually is considered to be recoverable, but the amount can range considerably higher, according to Dr. Engelder.

For Pennsylvania, the potential exploitation of the field poses some substantial issues. Parts of the field are beneath some of the state’s prime forest land, and under other environmentally sensitive surface features. Given that the expansion of conventional drilling leases in state parks and forests already has led to controversy, drilling for the deep shale would be closely scrutinized.

There is something of an advantage, in that multiple shale deposits are accessible by horizontal drilling underground from single vertical shafts. 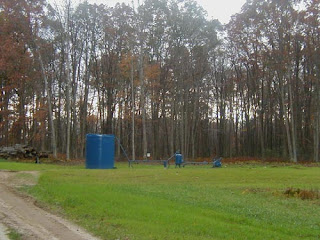 The tree huggers have yet to be heard from...

Map of potential fields and view of producing gas well from Mid-East Gas. Clicking on them should make them bigger.
Posted by Mark Tempest at 2/19/2008 02:35:00 PM