Shocked, I tell you, shocked! Corruption in Kosovo 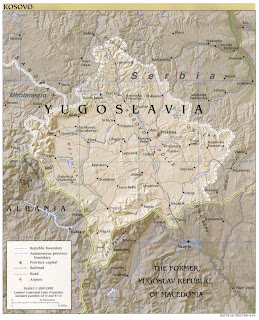 John Rosenthal sends along links to a couple of his articles including Corruption and Organized Crime in Kosovo: An Interview with Avni Zogiani:

As Kosovo prepares for new Prime Minister Hashim Thaci to declare its independence in the days or weeks ahead, Kosovo society is wracked by corruption and organized crime. According to the estimate of the United Nations Mission in Kosovo (UNMIK), organized crime accounts for some 15-20 percent of the Kosovo economy: a figure that would presumably be far higher if one subtracts the substantial portion of Kosovo GDP made up of foreign aid.

John also offers up a view of Kosovo becoming an EU protectorate (more likely a millstone about the EU neck) here:

As noted in the Executive Summary of the Ahtisaari Plan -- or, as it is officially known, the "Kosovo Status Settlement" -- the powers of the ICR will "include the authority to annul decisions or laws adopted by Kosovo authorities and sanction or remove public officials whose actions are determined by the ICR to be inconsistent with the letter or spirit of the Settlement." In addition to naming the ICR, the EU will dispatch a "European Security and Defense Policy" (ESDP) Mission to Kosovo. Whereas this mission is commonly described as having merely advisory or "mentoring" functions, a glance at the details of the plan (Annex IX, Article 2.3) makes abundantly clear that it will in fact assume the ultimate operational responsibility for a wide range of essential police and judicial matters in Kosovo. In short, the Ahtisaari Plan does not foresee the independence of Kosovo, but rather its definitive separation from Serbia and the establishment of an EU protectorate over the territory.