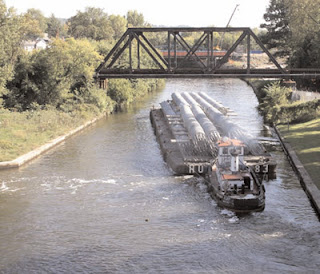 "Anything that drives up the [shipping] cost is a problem" for the price of products — all products, and the materials that go into them. That's inflation, which is pretty good at provoking recession, too. So economizing on the price of delivery would be important. Ditto the consumption of fuel. Anybody got an idea?

In other words, fewer trucks, more tugs and barges.

The quote comes from the article "The 20/20 Harbor" by Don Sutherland appearing at page 34 in the January 2008 of Marine News downloadable in pdf format here. Naturally there is a suggestion that the federal budget is short changing the maritime transportation industry:

...when Rep. Elijah Cummings, D-Md held hearings on the subject in February of this year, he noted that the federal budget for 2007 includes $39b in federal highway aid, and just $446m for maritime transportation.

But my key takeaway from the article is that the old canal systems may offer help is easing port congestion and lower transportation costs, ultimately benefiting consumers:

"The 2005 Transportation Bond Act authorized $3 million for a canal container-on-barge demonstration project, including design and construction of two container barges specifically built for the canal," said one upstate insider. "The agreement freeing up the money has not been finalized. My own feeling is the key is to load barges directly from ship. This would represent a fraction of the containers coming into port but fractions are important when your dealing with such big numbers."
The thinking is that the Port Authority of New York/New Jersey, already dredging to a 50-foot depth, is looking forward to post-Panamax ships bypassing the West Coast and coming straight to the east. "But nobody will tell you that a container arriving by ship makes it out of the Port of New York by land quickly now, and efforts with the New York Container Port (formerly Howland Hook) and feeder services notwithstanding, a serious ramping up of the volume certainly will not help" in alleviating container congestion. Our source is not authorized to speak for any agency, hence requests anonymity. No one seems to be authorized — for in a vacuum of planning, who's authorized for anything? But he does have his informed opinion. "Though a relative concentration of consumers is not necessarily found in upstate NY, certain distribution centers are and — perhaps more importantly — land for new distribution centers is plentiful. When you couple that with the fact that the Canal could be a corridor to points west, north, and even east with multimodal connections, it really does start to make sense."
Is the Canal large enough for modern needs? What happens when winter weather closes it? Studies covering the Canal's commercial prospects were completed years ago, but not read widely. Too bad. The planning, the agreements, the politics are the hard part. Actually implementing them would be easy — it's what the maritime industry does.


Photo is from the article and shows materials for highway construction being delivered by barge. 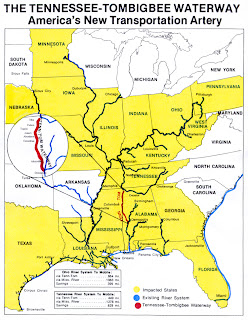 Just a side note on one of the newer canals serving the United States - the TennTom:

The United States is served by an extensive inland waterway system unparalleled in the World. Completed in December 1984 after 12 years of construction at a cost of nearly $2 billion, the Tennessee-Tombigbee Waterway is one of the most modern components of this world class transportation network. It provides a low cost and energy efficient trade link between the Sunbelt states and 14 river systems totaling some 4500 miles of navigable waterways that serve mid-America.

Perhaps the picture here best demonstrates the efficiencies of water transport.
Posted by Mark Tempest at 2/06/2008 08:35:00 AM