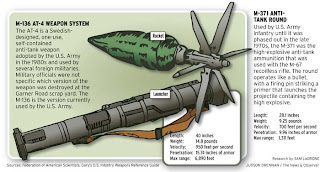 A couple of days ago, two workers at a Raleigh metal processing plant were injured when some non-disclosed munitions (Army artillery rounds or mortar shell) blew up while being processed. As time progressed, additional munitions were discovered at the plant and detonated by, I assume, ARMY EOD personnel from nearby Ft. Bragg.

Two scrap metal collectors in Sanford have been arrested in connection with the military anti-tank shells that exploded Tuesday in a Raleigh scrap metal yard.

The two men, whose names weren't released, were charged Tuesday with immigration violations, said Capt. David Smith, a spokesman for the Sanford Police Department. It was not immediately clear whether they also have been charged with possessing explosives.

Meanwhile, Raleigh officials said at a news conference today that military experts were in the "latter stages" of destroying munitions found at the scrap metal facility, Raleigh Metals Processors on Garner Road. But they did not know when the work would be complete.

Officials declined to say how many munitions had been located and destroyed, saying the military experts would conduct a debriefing when their operations are complete.

The live munitions, including more than two dozen anti-tank rounds, turned up in a load of scrap metal dropped of last week at the scrap yard. Some of the ammunition exploded on Tuesday, injuring two workers, as it was being compacted into bales for recycling.

Investigators traced the explosives to the Sanford men, who told police they had gotten the munitions in the Fort Bragg area, said Smith, of the Sanford Police Department. He declined to elaborate, saying he did not want to harm the ongoing federal investigation.

"That's what the suspects told us in the course of our involvement," he said. "They gave us specific information, but I can't go into that."

A Sanford police SWAT team found one of the men, along with spent shell casings and one live artillery round, at a home in the Carver Drive area in Sanford, Smith said. The second man was found in the Broadway area of Harnett County.

The fact that the live ammo was in a yard "makes me believe they just didn't know what they had," he said.

The two men were being held while the FBI and federal Bureau of Alcohol, Tobacco and Firearms continued their investigation. The federal agencies are taking the lead in the probe, Raleigh officials said.

Raleigh Police Chief Harry Dolan declined to say at today's news conference how many munitions had been located and destroyed. The military experts will conduct a debriefing when their operations are complete, he said.

Today is the fourth day of detonations at the plant. Raleigh police closed a section of Garner Road near the company again today, and nearby residents once again had to evacuate, though they have been allowed to return to their homes at night.

The concussive booms and evacuations have been a major disruption for those living near the largely industrial area just south of Raleigh's Beltline.

Spent shell casings? I can understand those, but a live artillery round? Holy catfish!