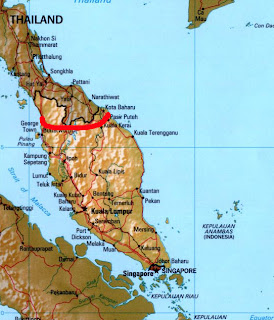 As reported here, work has not yet started on the pipleine designed to allow avoidance of the Strait of Malacca:

After a promotional blitz last spring and summer, developers of a proposed $7 billion oil pipeline across the Malay Peninsula have gone quiet.

The pipeline, traversing 310 kilometers, or 193 miles, of northern Malaysia, was originally planned to break ground this year, with a $2.3 billion first phase expected to be operational by 2011. But no work has started on the three planned pipes, and no firm date for the start of construction has been announced.

Norliah Daud, a senior executive at Ranhill Engineers & Constructors, the big Malaysian company that is the designated engineer for the project, said last week that the project had been delayed, mainly because of land acquisition issues.

Hasbullah Abdul Jalil, general manager of Trans-Peninsula Petroleum, or TPP, a privately held company that is spearheading the project, confirmed that no land had yet been acquired, pending completion of a survey and confirmation by the government of existing land titles.

Analysts say the delay has done nothing to disperse long-running doubts about the project's feasibility.
***
Other questions focus on the economics of using the pipeline to ship oil from the Middle East to East Asia.

The pipeline would bypass the Strait of Malacca, through which one-third of the world's oil flows, shortening the tanker route and avoiding the waterway, which is one of the world's most congested and is known for pirates, though that danger has declined in recent years.

About 18,000 oil tankers move through the strait every year, or nearly 50 a day, Rahim, TPP's chairman, said. Without the pipeline, traffic through the waterway is expected to double by 2020, TPP says, with voyage times and risk of collisions both increasing.

As well as siphoning off crude oil from the strait, TPP might benefit from synergies with a planned refinery complex near its western terminal, in Kedah. A local company, Merapoh Resources, has proposed a refinery with a processing capacity of 200,000 barrels a day. In October, Merapoh signed an outline agreement with CNPC Jihua Beijing Marketing, a unit of China National Petroleum Corp., to sell its entire output to CNPC under a 20-year contract, starting in 2013.

Mohamed Shafii Mustafa, executive director of Merapoh, said synergies could include sharing power and waste treatment plants and unloading facilities, though the refinery's products would be shipped to China by tanker, not through the pipe.

With demand for oil expected to double in East Asia, including China, to 20 million barrels a day by 2020, Rahim said, the pipeline would offer both maritime safety and geopolitical security benefits for countries that could be at risk from a shutdown of the strait.

In a thinly veiled reference to the United States, President Hu Jintao of China was quoted by Xinhua News Agency as far back as 2003 as warning that "certain major powers" might seek to control oil flow through the strait. Analysts say China and some Middle East countries, including Iran, that depend heavily on the strait to supply East Asian consumers would welcome alternative routes and reserve storage facilities.

Still, using the pipeline would involve unloading and reloading, processes that could be costlier and more time-consuming than supertanker transit through the strait and around the tip of Singapore.

"We have raised some concerns about the economic viability of the project," Eng commented last week.

Still, some East Asian oil ports do not have sufficient water depths to handle very large crude carriers, and it would make sense for some shippers to use the pipeline to transfer the oil onto smaller vessels on the east coast terminal, he said.

To be profitable, analysts say, the pipeline would need to be used on a consistent basis by an oil-thirsty East Asian country, but TPP says no users have signed up.

PetroChina, for example is building a $19 billion pipeline to bring natural gas from Turkmenistan, and a major oil pipeline from Kazakhstan is being expanded. China is also in talks with Myanmar to build oil and natural gas pipelines, including a transit line that would deliver Middle East oil to southern Chinese provinces.

Email ThisBlogThis!Share to TwitterShare to FacebookShare to Pinterest
Labels: Strait of Malacca