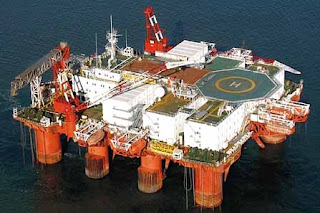 Offshore oil platforms could, possibly, be at some risk from certain terrorist actions...but a report of one suffering a "dream attack" as set out here, suggests that a little pre-panic investigation might have saved a lot of time and trouble:

The evacuation on Sunday of an oil platform off the northeastern coast of Britain was very real and very urgent at first, as one of many initial news agency reports indicated:

An oil rig in the North Sea issued a security alert Sunday and authorities sent helicopters to evacuate more than 500 workers, the Ministry of Defense said.

What was the trouble? Rumors of a bomb-disposal team on its way to the rig to investigate an unusual device added impetus to the emergency, as more than a dozen helicopters made bee lines to extract the rig crew from harm’s way. A Nimrod spy plane was sent to coordinate the exodus.
***
According to witnesses, a 23-year-old catering worker on the rig woke up on Sunday utterly convinced that her nightmare was about to come true: the rig was about to explode. Exacerbating the situation further was a furious game of telephone that ensued, resulting in what one energy news site said was the biggest evacuation in the history of the North Sea.

The site, Energy Current, has the explanation from a union official who was left slackjawed by accounts of the incident from his members:

The guys on the platform are saying she had a dream, and from there it just grew arms and legs. How it ever got to where it did astounds me. I still find what happened yesterday to be absolutely crazy. There was never any need for it. If this girl was hysterical, as they suggest, then there are ways to deal with that, and there are procedures for checking these sort of things. But I’m not criticizing the management out there.

Well, he may not be criticizing them, but I am. There should have been a plan in place that was followed to work through this situation...

Britannia Operator Ltd, the company which owns Safe Scandinavia, said the "down-manning" - or evacuation - "occurred following allegations by a worker on the Safe Scandinavia that there was a possible suspicious device on the flotel".

Hundreds of the 539 people aboard the platform were moved across a connecting bridge to an adjacent oil rig, and 161 were moved to nearby installations. The Coastguard and RAF provided helicopters and fixed-wing planes, with the aerial fleet reaching a peak strength of 13. Bomb-disposal teams were placed on alert, but a thorough search found nothing of any concern.

Gary Hay, a North Sea offshore worker interviewed by the Beeb for his reaction to the incident, said the shutdown would have cost the oil companies large sums in lost production, "but it will be Joe Public who will pick up the cost of the evacuation operation", he added.

A union official contradicted the view that an irresponsible employee was to blame. Jake Molloy of the Offshore Industry Liaison Committee told the Guardian:

"It appears that the whole thing was started when someone was a bit upset about a dream they had... This girl had a dream about a bomb being on board."

He said the story of a bomb had reached senior rig management and the rumours had led to an alert being issued. 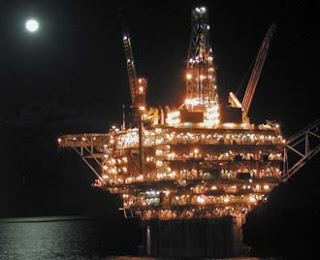 "That appears to have sparked one of the biggest security operations the North Sea has ever seen," said Mr Molloy, describing the incident as "complete madness on behalf of everyone. There was never any reason to evacuate the platform ... The cost has been astronomical and there was never any need for it".

A Romanian woman has appeared in court after a security alert led to the evacuation of a North Sea oil platform.

Dana Rosu, 23, described by friends as a "normal girl who has never been in trouble", appeared in private at a court in Aberdeen in relation to a charge of breach of the peace.

She made no plea or declaration at the brief hearing and was remanded in custody to hospital for assessment.
She was detained after an incident led to the eva
cuation of 161 oil workers from the Safe Scandinavia floating hotel, 130 miles north-east of Aberdeen.