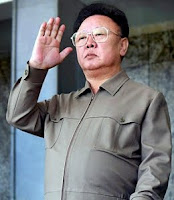 From the South Korean newspaper The Chosun Iibo here:


North Korean leader Kim Jong-il has ordered the military to be ready for combat, a Seoul-based defectors' group said Tuesday quoting a source in the reclusive country.

North Korea Intellectuals Solidarity said when South Korea announced the findings of a probe into the sinking of the Navy corvette Cheonan last Thursday, O Kuk-ryol, the vice chairman of the North's National Defense Commission, in a statement said Kim ordered the entire military, the Ministry of Public Security, the State Security Department, the Worker-Peasant Red Guard, and the Red Youth Guard to be ready for combat."

Kim's order was relayed via wire broadcasting to a speaker installed in each home. These broadcasts are often used by the regime when it disseminates information that it does not want to be known abroad.

That doesn't sound good - what with the DPRK being all "nuked up" these days. I wonder if any one has told old KJ-il about the fallout patterns that might come from nuking the South Koreans, including all the world of hurt the USAF and USN might rain down on his lairs? Maybe he figures his bunkers are deep enough...

Meanwhile, on the surface, the U.S. seems to be willing to try to talk KJ-il to death . . .

On the other hand, there is this:


South Korea and the United States will hold a large-scale combined exercise to deter North Korean submarine infiltration and block sea lanes to the North between June and July, top naval commanders from the two allies announced Tuesday. The joint naval exercise would be a step toward the resumption of an annual large-scale field exercise by the South Korean and U.S. militaries, observers said.
***
Earlier in the day, Rear Adm. Peter Aguon Gumataotao, commander of U.S. Naval Forces Korea, visited the ROK Navy headquarters in South Chungcheong Province, to meet with Chief of Naval Operations Adm. Kim Sung-chan for discussions over joint efforts against North Korean provocation in waters near the sea border.

"To support the ROK Navy's countermeasures against the North, U.S. Naval Forces Korea will use all available capabilities to play a significant role," Gumataotao was quoted by a South Korean Navy spokesman as saying.

Kim and Gumataotao discussed details to prepare for a ship-interdiction exercise in waters around and outside of the Korean Peninsula later this year, the spokesman said.

Defense sources said the forthcoming naval training would involve up-to-date warships of the U.S. 7th Fleet, such as a nuclear-powered submarine, Aegis-equipped destroyers and an aircraft carrier.

Generally, if you have an aircraft carrier involved, there are more than a couple of destroyers along for the training exercise. See here.

60 years ago in June, the Korean War got started when North Korean forces rolled across the border. 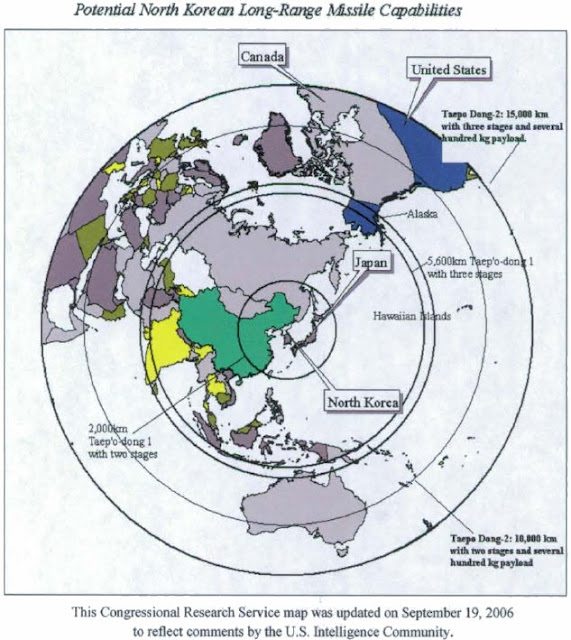 For some reason, Guam is not shown on that map. Or maybe it's just a dot in the South Pacific. Where America's day begins.

UPDATE: An intel guy has his own take with a long list of previous North Korean provocations.
And, to appear well-informed, you might like North Korean Ballistic Missile Threat to the United States (pdf), though it is 2 years old.
Posted by Mark Tempest at 5/25/2010 11:39:00 PM