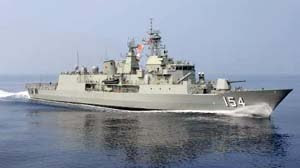 An Australian naval vessel has stopped a boatload of pirates believed to have been plotting attacks on merchant ships off the east coast of Africa.

The HMAS Parramatta was patrolling a shipping lane in the Gulf of Aden, off Somalia, on May 25 when it intercepted a skiff carrying a group of suspected pirates.
***
When first sighted, the suspected pirates were throwing items overboard, including some weapons.
***

Australian crew boarded the boat, but found no additional weapons.

They seized any items that could have been used in a piracy attack, and then left the vessel with enough supplies to make its way safely back to Somalia.