Everyone seems to be picking on the Somali pirates.


In a co-ordinated search with an EU Naval Force maritime patrol aircraft, operating out of the Seychelles, HMS Chatham's Lynx helicopter spotted a larger vessel towing the two attack boats approximately 150 miles (240km) off the coast of Tanzania on Friday 14 May 2010.

After monitoring the vessel through the night, at dawn, in a well planned operation, the pirates were forced to surrender by the overwhelming force posed by HMS Chatham, her Lynx helicopter and fast boats containing the ship's Royal Marines detachment.

The Royal Marines team boarded the larger craft and found ten Somalis and a large amount of fuel on board; the suspected pirates had been observed throwing items, including their weapons and other piracy-related equipment, into the sea. 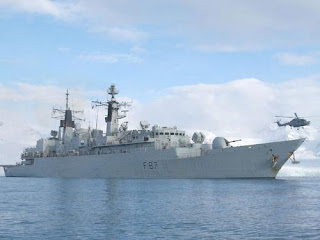 The two smaller attack boats were fitted with powerful outboard engines and again contained a considerable amount of fuel. These were separated from the larger craft by the Royal Marines team and HMS Chatham and her Lynx helicopter used their combined firepower to destroy the smaller craft, ensuring that the suspected pirates could not continue with their mission.

Disarmed and without the means to commit an act of piracy, the ten Somalis were left with only enough fuel in the larger vessel to return to Somalia.