Somali Pirates: Grab One Ship, Attack Another Using the First One as "Mother Ship" 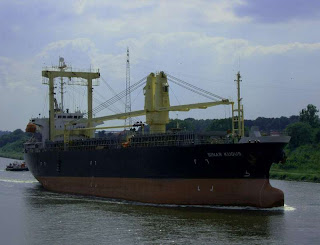 
At approximately 0730Z on 16 March, the Bulk Cargo Carrier MV SINAR KUDUS was pirated approximately 320 nautical miles North East of the island of Socotra in the Somali Basin. Within 24 hours of being taken, she was used to launch an unsuccessful attack on the MV EMPEROR.

The MV SINAR KUDUS, which is Indonesian flagged and owned, was on its way to Suez (Egypt) from Singapore when it was attacked. Details of the attack are not known at this time but initial reports from the crew stated that 30 to 50 pirates had boarded and taken control of the vessel. The MV SINAR KUDUS has a crew of 20, all Indonesian.

Within 24 hours of the attack, the MV SINAR KUDUS was used to launch a further attack on the Liberian flagged Bulk Carrier MV EMPEROR. A skiff with 5 pirates on board was launched from the SINAR KUDUS and attacked the EMPEROR but was repelled by the armed force from the merchant vessel. The EMPEROR was subsequently reported to be safe.(emphasis added)