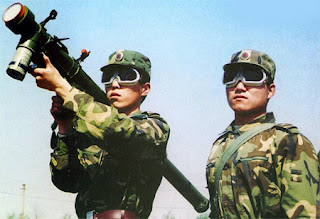 Interesting piece from AVIATION WEEK: Weapons Migrate From China to Afghanistan. Not so much the weapons, but the reports of Chinese trainers aiding the Taliban in Afghanistan:


Chinese advisers are believed to be working with Afghan Taliban groups who are now in combat with NATO forces, prompting concerns that China might become the conduit for shoulder-fired anti-aircraft missiles, improved communications and additional small arms to the fundamentalist Muslim fighters.

A British military official contends that Chinese specialists have been seen training Taliban fighters in the use of infrared-guided surface-to-air missiles. This is supported by a May 13, 2008, classified U.S. State Department document released by WikiLeaks telling U.S. officials to confront Chinese officials about missile proliferation.

Photo and weapons info from Sinodefence.com, where it is noted, "The missile has also been produced by Pakistan under license as Anza MK-2." .