1. After interviewing the personnel aboard, the following report is submitted.
2. Twenty to twenty-five planes were observed by MILLIGAN, B.M.2c, at 0730 circling at an altitude of approximately 5000 feet. In view of frequent Air Attack Drills, no importance was attached to their presence.
3. At 0755, ROBERTS, S.M.3c, saw a plane dive from the east and drop a bomb in the Arizona which soon burst into flames. Sounded General Quarters and manned Guns No. 5 and No. 6 – 3"-50 caliber. Under the direction of Lt.(jg) TRITLE, Gunnery Officer and Officer-of-the-Deck, assisted by KRAMBUHL, C.T.M., ammunition was broken out from magazines for 3-inch guns and 50-caliber machine guns and first shot was fired at attacking planes between ten and fifteen minutes after alarm sounded.
4. Two planes were definitely shot down by this ship's fire – one by Gun No. 6 and the second by starboard waist 50-caliber. The latter plane exploded in mid-air and was seen by bridge personnel to fall between USS Detroit and Ford Island. The former fell in hills about one mile northwest of AIEA mill stack. Our fire persisted for approximately 45 minutes, expending 57 rounds of 3-inch and 600 rounds of 50-caliber. It is possible a third plane was shot down by Gun No. 6, although fire from other ships were also concentrated on it.
5. Bridge personnel observed dive bombing attacks on battleship row approaching from both east and west. Those from the east circled to the north after dropping bombs; those from the west, circled to the south. All hands recalled their low altitude and relative slow speed. A bomb, obviously intended for the USS Solace, dropped 100-200 yards to the west of it. Enemy planes were described as low wing chunky monoplanes – both single and two seaters – of silvery light blue, also a few, smoky green in color – and displaying a red disc on under wing surfaces as well as on fuselage tail surface. SLATON, S.M.3c, from bridge observed two planes with large United States Aircraft insignia on forward fuselage side surfaces and smaller red disc on fuselage surface near tail.
6. Planes attacking with torpedoes were observed to sweep down from direction of Merrys Point to within ten to fifteen feet above water and release torpedoes at Arizona, Nevada, and California. It is believed gunfire from the USS Chew, moored alongside to port, shot down a plane which dropped a torpedo on Arizona. Observers estimated there were approximately 45 enemy planes in the air. No casualties to personnel nor damage to materiel were sustained by this vessel.
7. The Commanding Officer wishes to call to the attention of his immediate superiors the coolness, initiative, and courage displayed by the crew, many of whom were unfamiliar with rapid fire, particularly while under attack. He desires to commend especially KRAMBUHL, C.T.M., MILLIGAN, B.M.2c, WHITE, E.M.1c, and KROON, S.C.1c, for their excellence in leadership and unusual attention to duty during the surprise emergency.

One ship, one report. So it began. 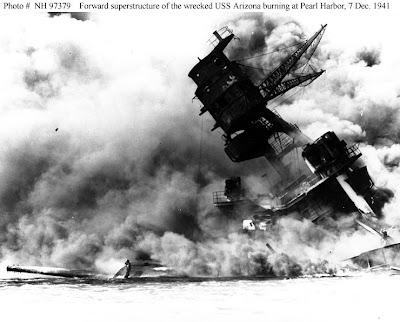