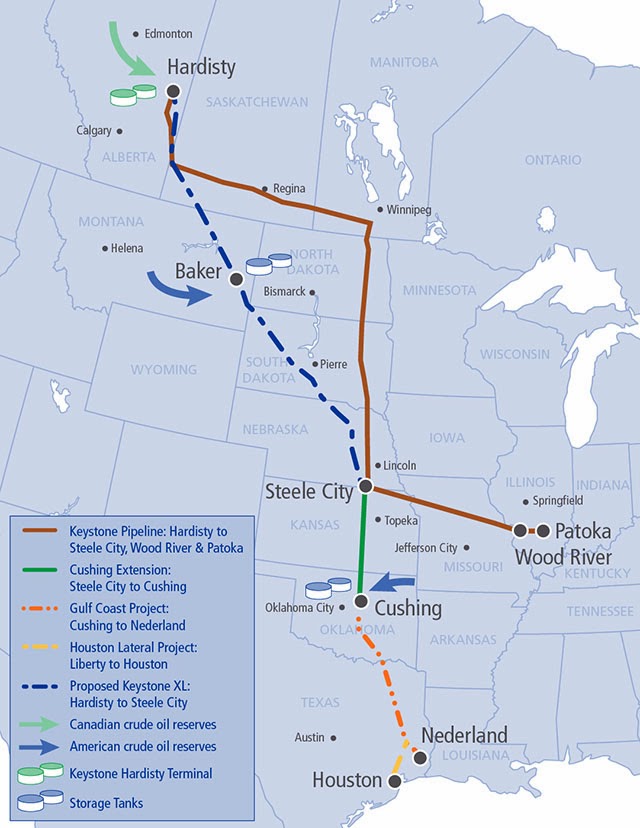 Well, if we really, really want to work to free ourselves from the many problems of the Persian/Arabian Gulf and a long sea line of communication carrying crude oil through often troubled waters, then this ought to be good news: "No major environmental impact from Keystone XL, DOS says", as set out in the Oil and Gas Journal,


“This final review puts to rest any credible concerns about the pipeline’s potential negative impact on the environment,” American Petroleum Institute Pres. Jack N. Gerard said. “This long-awaited project should now be swiftly approved. It’s time to put thousands of Americans to work.”

“The State Department has once again found nothing in its environmental analysis that would prevent the Keystone XL pipeline from moving forward,” US Chamber of Commerce Pres. Thomas J. Donohue declared. “It’s time for the administration to stop playing politics with a project that will create good-paying American jobs, improve our energy security, and strengthen relations with our closest ally, Canada.”

Obama vowed to approve Keystone XL if it was proven to be environmentally safe, according to American Fuel and Petrochemicals Manufacturers Pres. Charles T. Drevna. “Today’s release of the pipeline’s supplemental EIS provides the irrefutable evidence sought by the president, and he should waste no further time in delivering on his promise,” he said.

Of course, there are the nay-sayers:


Environmental organizations and other opponents immediately dismissed the supplemental EIS’s findings as corrupted by oil industry influence and seriously flawed.

“[DOS’s] environmental review of the Keystone XL pipeline is a farce,” declared Friends of the Earth Pres. Erich Pica. “Since the beginning of the assessment, the oil industry has had a direct pipeline into the agency. Perhaps most frustrating is the apparent collusion between [DOS], the oil industry, and the Canadian government.”

“Even though [DOS] continues to downplay clear evidence that the Keystone XL pipeline would lead to tar sands expansion and significantly worsen carbon pollution, it has, for the first time, acknowledged that the proposed project could accelerate climate change,” said Susan Casey-Lefkowitz, international program director at the Natural Resources Defense Council. “President Obama now has all the information he needs to reject the pipeline. This is absolutely not in our national interest.”

Sierra Club Executive Director Michael Brune, meanwhile, said, “The president has two choices before him: fighting climate disruption, or promoting an energy policy that includes the expansion of dirty fossil fuels like tar sands. The Keystone XL tar sands pipeline fails the basic climate test, and it’s not in the interest of the American people. The president should reject the tar sands pipeline once and for all.”

So, months of study and delays which, once again, find "no major environmental impact" are a "farce" because they don't coincide with the agendas of FOE and the Sierra Club.

Noteworthy, too, is that no adverse decision to their positions can be simply characterized as "in error" but always must be demonized. That's a very old debating trick.

And a tiresome one.