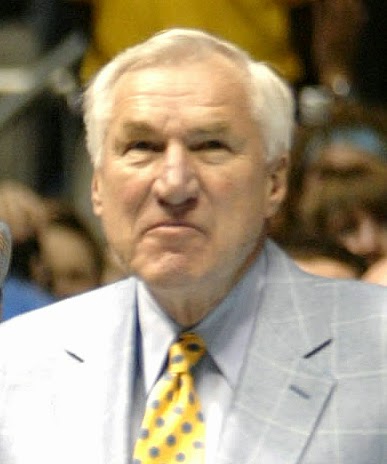 any walk of life, but especially to the military where leaders often have to coach 18 to 25 year old young men and women to become the best they can be - both for themselves and for the team.

Some of Coach Smith's thoughts from his book The Carolina Way:
Care. Set high standards and help your people reach them. Treat people as you would like to be treated. Put others first. Make sure everyone understands their roles. Delegate authority. Hold people responsible. Be fair.

One other lesson to be learned. Coach Smith took a lot of strong stands in his life. For example, he integrated the UNC athletic program when he recruited Charlie Scott to play for the Tarheels in 1966, among other things. Perhaps that is Coach Smith most valuable lesson to leaders - have the courage of your convictions.

Proud to be a Tarheel

UPDATE: Forgot to give a hat tip and link to Championship Coaches Network .